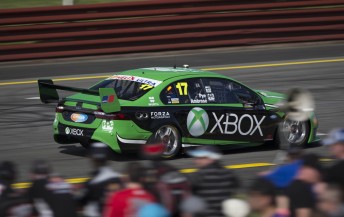 Failing to select first gear on the startline was the simple reason for Marcos Ambrose’s poor start to the Wilson Security Sandown 500.

The DJR Team Penske Ford plummeted from 11th on the grid to 23rd by the first corner as the returning former champion failed to take off with the field.

Fined $5,000 for a practice start during Friday afternoon’s ride session, Ambrose had made a strong getaway in yesterday’s co-driver sprint.

“I had a great start in the sprint race but that certainly wasn’t the case today,” admitted Ambrose.

“I got a bit out of sequence during the start procedure and didn’t have it in gear on the start line.

“After a quick reset we were underway but it cost the Xbox Falcon a lot of spots.”

An early first pit stop helped the #17 Falcon gain track position back, with Ambrose rising to an eventual 10th before the second round of stops began as the co-driver laps were completed.

Primary driver Scott Pye remained 10th until the car lost out in the final stops, subsequently spending the final stint of the race stuck behind Michael Caruso’s Nissan in 12th.

“Everyone was having trouble trying to pass, and we were just stuck in a long line of cars,” explained Pye.

“I think we lost some time in the final pitstop. I’m not sure why but it is something we will have to review in our build up to Bathurst.

“Overall I think we showed a lot of positive progress here at Sandown, but we could not convert it to a good result.”