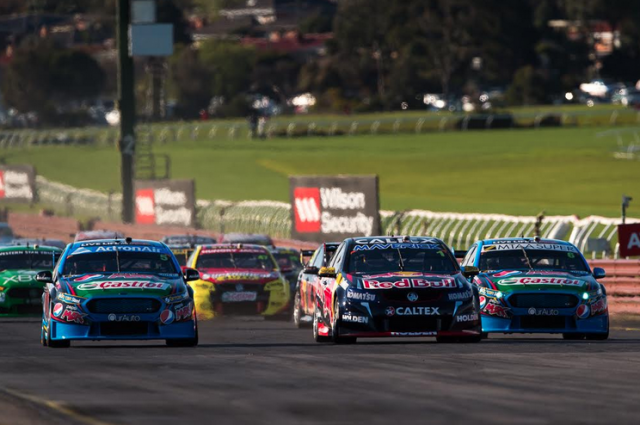 Whincup held off the Prodrive Fords in the second qualifying sprint

Jamie Whincup survived a one lap shootout at the end of the second qualifying race to secure pole position for the Wilson Security Sandown 500.

A crash for Andre Heimgartner and Jack Perkins set-up the single lap sprint to the flag, which saw Whincup hold off the advances of eventual second place finisher Mark Winterbottom.

Whincup had started from pole, bumping fellow front-row starter Winterbottom wide after locking up on the way into Turn 1.

The Red Bull Holden driver held the lead for the remainder of the 20 laps, despite heavy pressure from the chasing Fords of Winterbottom and Chaz Mostert.

In the end, Winterbottom ran wide at Turn 1 on the restart, ending his hopes of a late attack for the win.

The mistake allowed Chaz Mostert to move to the outside into Turn 2 but, after side-to-side contact with Winterbottom, the #6 Falcon ran through the grass and had to settle for third.

Shane van Gisbergen and David Reynolds were also in the train behind Whincup throughout the race on the way to fourth and fifth respectively.

The hardest luck story was Perkins, who ran sixth early before being punted wide at Turn 9 by Craig Lowndes, who soon received a drive-through penalty.

A brake problem for Andre Heimgartner later sent the Super Black Ford into a spin at Turn 6, resulting in heavy contact with Perkins who had no way to avoid the out of control Kiwi.