Prodrive underlines authority ahead of qualifying

Prodrive underlines authority ahead of qualifying 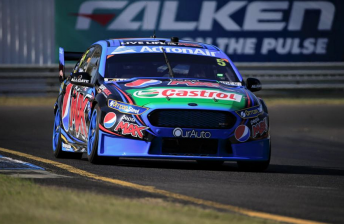 Prodrive’s Pepsi Max Fords continued to set the pace at Sandown in the final practice session prior to qualifying.

Mark Winterbottom waited until moments after the chequered flag to put down the 40 minute session’s fastest time of 1:08.87s.

The last gasp effort edged team-mate Chaz Mostert by 0.05s as new tyres for all of the front-runners provided a form guide for qualifying.

Jamie Whincup ended up third having become the first into the 1:08s with just over 10 minutes remaining.

The Red Bull driver did not improve in the closing stages, but was still quick enough to end up within 0.1s of the pace-setting Falcon.

Primary drivers undertook the bulk of the duties as they worked on set-ups ahead of the 20 minute qualifying session.

As was the case on Friday, windy conditions continued to challenge the drivers, particularly into Turn 1.

Dale Wood brought out the red flags in the early minutes when a lock-up at Turn 1 ended with the #21 Commodore nudging the tyre wall.

The GB Galvanizing entry was in more trouble later on, running through the Turn 9 gravel before rejoining unscathed.