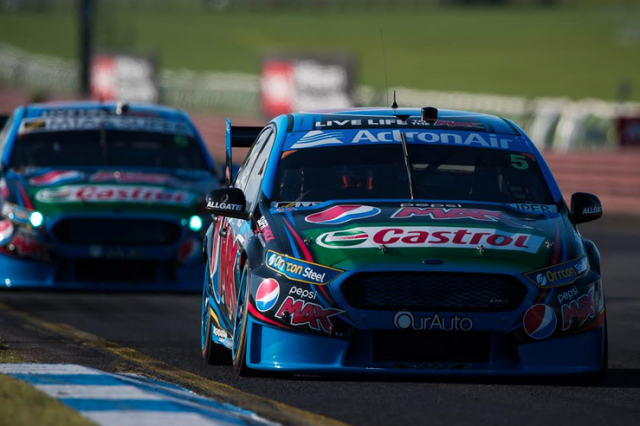 Winterbottom and Mostert made minor contact on the final lap

Chaz Mostert has made light of late-race contact from team-mate Mark Winterbottom that sent the #6 Ford off the road on the final lap of today’s second sprint race.

Mostert had ranged up along the outside of Winterbottom into Turn 2, but found himself escorted off-track by his team-mate.

The reigning Bathurst winner rejoined at Turn 3 and swiftly went on to secure third place behind Winterbottom and winner Jamie Whincup.

“I was missing a bit of blue on my front door so we just worked together to put it back on there,” smiled Mostert in the post-qualifying press conference.

“That’s the way it goes. We’re racing out there hard for qualifying positions for tomorrow.

“I had a good run off Turn 1 and thought I could get to the outside and obviously with a bit of sun out there or something like that Frosty didn’t quite see me.

“Luckily enough we cooled the tyres down Shane van Gisbergen-style across the grass and the last half a lap was alright. It’s all good.”

Winterbottom had been focussed on wrestling the lead from Whincup and affirmed he was unaware of his team-mate’s move.

“I just tried to get a good restart,” explained Winterbottom.

“Jamie went to the inside (into Turn 1) and I had a bit of front (tyre) scrub, but I didn’t expect to get him on the outside. I didn’t even see Chaz to be honest.”

The two Prodrive Fords appeared to have more pace than Whincup’s Holden throughout the race, but Winterbottom was unwilling to take a risk to get by.

“Tomorrow is going to be a different story, I’d squeeze her in there,” said Winterbottom.

“You see some guys out there bumping people and getting drive-throughs. It’s not worth a penalty for one spot.

“We’re on the front-row, Steve will do a ripper start and it won’t make much difference by Turn 1. It’s a long way tomorrow.”

Whincup admitted that Red Bull has to find more speed overnight if it is to be able to compete with the Fords over the 161 lap journey tomorrow.

“PD (co-driver Paul Dumbrell) did all the work this morning to get us from third to the front and unfortunately was just holding the field up,” he said.

“We’ve still got a bit of work to do. The game is to try and be the quickest out there, so we’ve still got to put our head down.”