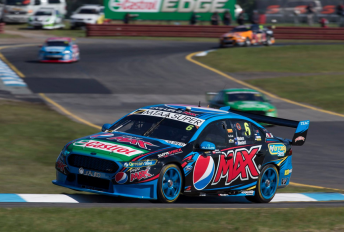 Mostert continued his recent qualifying supremacy by proving able to rise to the challenge set down by team-mate Mark Winterbottom.

Drivers completed three runs on new tyres throughout the 20 minutes, which was run under threatening skies that ultimately failed to impact track conditions.

Winterbottom held sway after the first runs with 1:09.18s before Mostert moved ahead on the second set of tyres with consecutive quick times that resulted in a 1:08.90s best.

The final flurry then saw Mostert put in what would prove an unbeatable 1:08.72s, with Winterbottom securing second by improving his best to 1:08.90s.

“It was pretty hooked up out there but we were still struggling with the balance,” said Mostert.

“I think it’s better as a race car than a qualifying car, but now it’s up to Cameron before we get in for the second race.”

Jamie Whincup and an impressive Lee Holdsworth secured third and fourth for their respective co-drivers Paul Dumbrell and Sebastien Bourdais.

The co-driver race will kick-off at 1400 local time, which in turn sets the grid for the primary driver heat that locks in the starting order for Sunday’s 500.