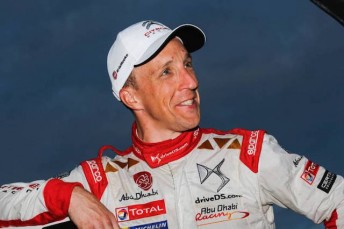 Meeke wrestled the lead back after the 50.80km SS9 Nambucca stage when he decided to gamble heavily and use soft compound tyres on all four corners of the DS 3.

Although the advantage did not translate to the margin Meeke had banked on, he managed to negotiate the next 7.74km Valla stage on completely worn rubber and head the overall classification by 2.3s.

“We had a big gamble on the tyres. We needed to take 15-20s off him (Latvala) so it was wrong choice,” Meeke said.

In the closing stages of SS10 Meeke’s predicament with ailing soft tyres saw him lose time but not enough to hand the lead back.

“When its a bit slippery you have to check yourself a bit.

“I’ll just drive my rally and see what happens.”

Andreas Mikkelsen is fourth, 5.2s off Meeke while Kiwi Hayden Paddon blistered into fifth position, just 9.3s from the lead as he found a 16s gain on his overnight position.

Paddon’s effort saw him slash his overnight deficit from the overall lead from 25s to 11.3s.

Then Paddon came out and took back-to-back stage wins in SS10, beating Ott Tanak (M-Sport) by .6s, giving himself a shot at a podium.

“The confidence with the car is much better today. Obviously I’m making the most of the road position,” Paddon said.

“We are going to have to push harder to keep up this afternoon but we’re back in the fight.”

On the brink of a third straight championship Ogier remains in an ominous position and is expected to turn up the heat on the return loop later today.

“I think we did a good loop again. Compared to my road position it’s still good to be so close to the lead,” Ogier said.