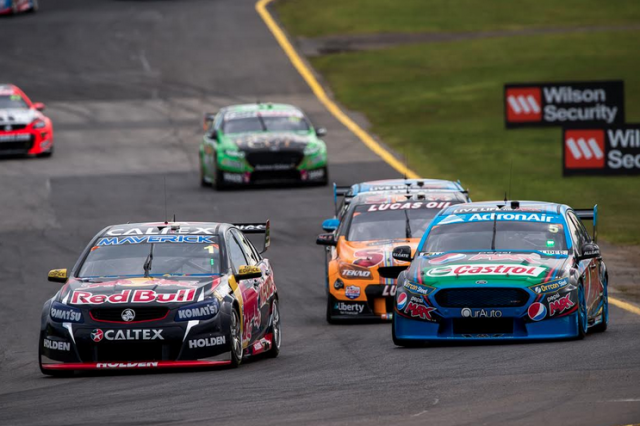 Starting third, it took just over a lap for Dumbrell to find his way by both Pepsi Max Prodrive Fords.

Dumbrell then cut past Owen at Turn 1 on the second lap before clearing out to record a 7.2s win at the end of the 20 laps.

The results hands pole position to Whincup for the afternoon’s second heat, with second for Owen ensuring Mark Winterbottom the outside of the front-row.

“A few guys had a scuffle so I thought I’d get out front and get the hell out of there,” smiled Dumbrell afterward.

Waters came home third ahead of Canto and Jonathon Webb, who lost places to both Fords with off track excursions, the second of which occurred on the final lap.

Returning veteran Russell Ingall carved from 12th on the grid to sixth on lap one, which he then held to the chequered flag.

The Frenchman started fourth but was bumped wide at Turn 1 by Webb, before copping a further shove from Ambrose, who in turn had been nudged by Canto. Miraculously, all avoided spinning in the melee.

Radiator damage took Jones out of the race. He was soon joined on the sidelines by David Russell, who pitted with damaged suspension after two off-track excursions.

The primary drivers will take to the track for the second qualifying race at 1610, setting the grid for Sunday’s Sandown 500. Bourdais and Ambrose in trouble at Turn 1