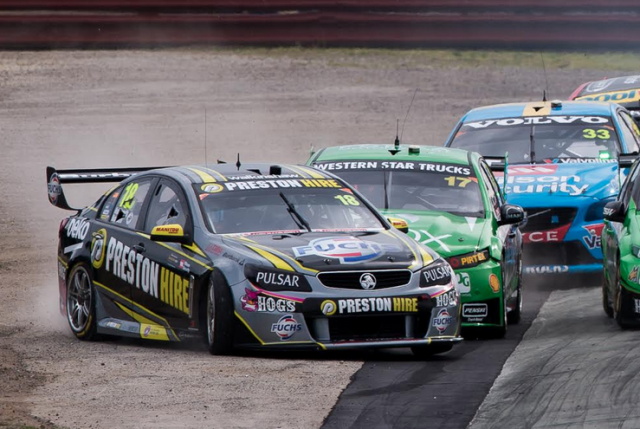 Bourdais hangs onto the Walkinshaw Holden at Turn 1

Sebastien Bourdais has warned the V8 Supercars field that he will take a more aggressive approach into Sunday’s Sandown 500 after being roughed up in the co-driver sprint.

Starting fourth, Bourdais was shoved wide by Jonathon Webb at Turn 1, before more contact from Marcos Ambrose required a big save from the French IndyCar ace.

Down in 12th after the opening lap, Bourdais was involved in further heated scraps in the mid-field on his way to an eventual 11th place finish.

“I was very conveniently placed for Mr Webby at Turn 1, which gave him a great run through and destroyed our race,” Bourdais told Speedcafe.com afterward.

“I’m really disappointed because it set the tone for a completely different race. I was doubting the car because it felt bent.

“You lose one position, two, three, they are buzzing around you like bees and you can’t disconnect yourself.

“It was disappointing because Lee (Holdsworth) had done a great job in qualifying and all I wanted to do was do these 20 laps and hold station. It didn’t quite work out.”

“I went down there and he was being interviewed, but before he started he just said ‘oh, sorry’,” recounted Bouradais.

“What gets me is that he got away with it. I thought the rules were pretty straight forward and simple in V8.

“If a guy is out of control, locking up and tagging someone in the rear axle it’s pretty black and white.

“I haven’t seen any actions being taken, which is unfortunate. If that’s the game, it’s ok, everyone can play that one. I will definitely be a lot less careful with what I’m doing tomorrow.

“Everyone will need to look in their mirrors if that’s the way it goes around.

“There’s not one guy that passed me without destroying my butt. The rear bumper of the car is destroyed left and right. It’s a different form of racing and I’ve probably got to adapt myself.

“Maybe it would be better racing the regulars who are more in the groove and not needing to prove anything.

“We had decent pace and started to show it when we were in the groove, but it was too late, the damage was done.”

The Turn 1 mishap also provided an action packed return to V8 Supercars for Ambrose, who had not taken part in a race since Albert Park in March.

Ambrose recovered to sit eighth by Turn 2; a position he held until the finish of the 20 lap sprint.

“The good thing is I got off the line pretty well, but it was just a ping-pong game down there in Turn 1,” Ambrose told Speedcafe.com.

“We came off the worst, but that’s the way it goes. It bent the toes (toe-links) a little bit and obviously some panels.

“It was frustrating that it’s so hard to pass in these cars with the current downforce configuration and the tyres we’ve got, you can’t make a pass.

“But we finished the race and that’s all I was trying to do, just give a decent position for Scott (Pye) in the next one.”