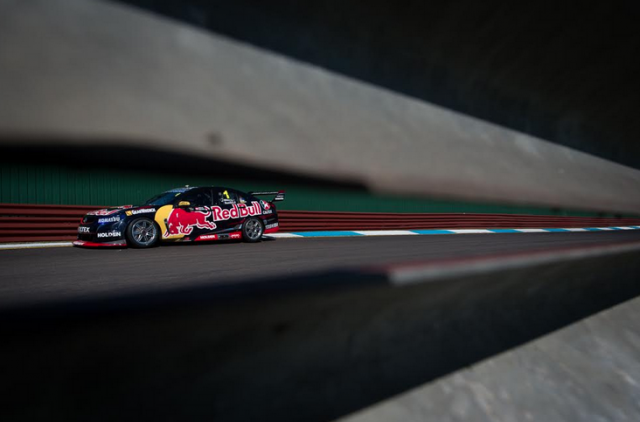 Jamie Whincup pipped a quartet of Fords to end opening practice for the Sandown 500 at the top of the order.

The Red Bull Holden’s best of 1:09.52s came in the dying seconds of the 30 minute hit-out, proving 0.1s quicker than Chaz Mostert in the leading Prodrive Falcon.

Whincup’s new car showed no signs of the vibration issue that halted its recent test at Queensland Raceway.

“The guys and girls have done a great job and there’s no vibration, so now we can focus on going fast,” said Whincup.

“The session was promising but we’ve got to keep our heads down and put our best foot forward for the rest of the weekend.”

The Fords of Mark Winterbottom, David Reynolds and Scott Pye completed the top five, having all spent time at in the top spot during the session.

The fastest time proved 0.3s adrift of Whincup’s best from the opening Sandown session last year, despite the implementation of a new final drive ratio that allows a higher top speed on the back straight.

Reynolds meanwhile completed the session with a caved in bonnet on the The Bottle-O Ford in a repeat of the issues seen with the FG Xs at the pre-season test.

The Nissans of Michael Caruso and Rick Kelly, which are both running Nissan’s new engine for the first time today, ended the run a the bottom of the time sheets.

The primary drivers spent the entire first session in the cars, with both of this afternoon’s 30 minute runs for co-drivers only.