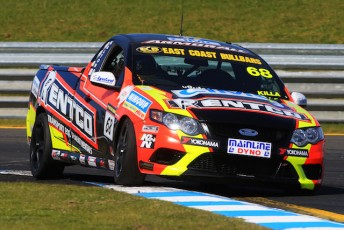 The Rentco Racing Ford driver posted a 1:21.3051 effort to secure the pole by 0.2s from Kim Jane’s Holden Commodore.

Walton, who finished second in the opening qualifying session, had held the previous category lap record at the Melbourne circuit.

“The Rentco Ford is great, it came good at Townsville but the Commodores had it over us there, so it’s good to come here and get a pole again,” said Walton.

“This is where it started for me and I just love this place.”

One of the stories of the session belonged to Utes debutant Todd Hazelwood as he secured third spot on the grid.

The Dunlop Series regular had topped the first qualifying session before ending the top 10 shootout 0.4s shy of Walton.

“We went a tenth quicker in the shootout, I’m still really stoked with my result, to never drive on a new tyre and it’s my first time in the category, I’m rapt,” said Hazelwood.

Nathan Pretty will join Hazelwood on the second row in fourth ahead of championship contender Adam Marjoram and South Australia’s Craig Dontas.

Utes rookie Ben Grice endured a challenging day on his category debut as he was hit with a formal reprimand for a breach of race management communications.

The son of Australian touring car legend Allan Grice headed to the pit exit prior to instructions which has seen him issued with a $500 suspended fine until the end of the year.

The opening V8 Utes race of the weekend is scheduled to start at 1110 (local time) on Saturday morning.