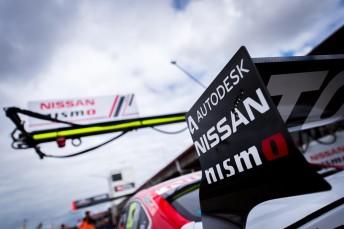 The manufacturer and its Melbourne-based V8 Supercars outfit have been working on the crucial upgrade since 2013, when it became clear that the standard head design had been maxed out.

After lengthy negotiations Nissan temporarily halted a casting plant in Mexico to create a limited run of blank cylinder heads for the team, which were delivered early this year.

The squad has since undergone an intensive research and development process with the new heads, before homologation testing took place with V8 Supercars in Brisbane last week.

It is understood that the upgrade has seen the engine jump closer to the category’s cumulative horsepower maximum, with further optimisation of the new package likely to follow.

While Sandown had been openly targeted as the debut date for the new engine, the team was tight-lipped on its existence when approached by Speedcafe.com in the Sandown paddock on Thursday.

The Altimas of Rick Kelly/David Russell and Michael Caruso/Dean Fiore are today running the new engine, for which parts are still in limited supply.

Rick Kelly’s Jack Daniel’s entry was absent from the Sandown garage area throughout Thursday, understood to be back in the team’s nearby workshop having its engine installed.

Work also continues to finish a new engine for the Todd Kelly/Alex Buncombe car for later in the weekend.

Timelines for the project have been so tight that Nissan’s recent pre-Sandown track test at Winton took place without the new engine in any of the four cars.

“We won’t be telling anyone what components are in what cars,” Rick Kelly told Speedcafe.com bluntly.

“We’re on a very big development run right now. There’s going to be new stuff in all of the cars and there will continue to be for the next few.

“In terms of what they are individually, we won’t go into the detail of that publicly.”

Kelly and Caruso are the highest placed Nissan drivers in the championship, sitting 10th and 13th respectively heading to Sandown.

Todd Kelly and James Moffat are 16th and 19th, having both suffered engine failures in the double-points Sunday races at recent events.

Last year’s Sandown 500 proved a tough slog for Nissan, with the Rick Kelly/David Russell entry ending up the highest placed of the quartet in 13th.

Kelly however stresses that engine performance is only one factor in overall lap time at Sandown, which is dominated by two long straights.

“For us here it’s about how we come off the corners,” he said.

“That’s the challenge for us. Whether or not we’ve cured the whole issue we’ve had here or not is yet to be seen.

“I think we’re going to have a little bit of work and a bit of refining to do, but we certainly have put in a lot of effort to make our cars perform better here.”