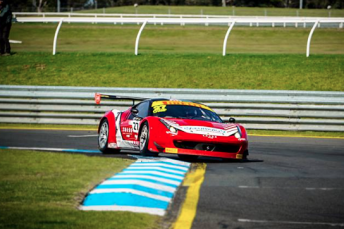 Jono Lester guided the Trass Family Motorsport Ferrari 458 to a fourth pole position of the season in a hard fought Australian GT qualifying session at Sandown.

The Kiwi was involved in a thrilling battle for pole with the Maranello Motorsport Ferrari 458 of Tony D’Alberto and Grant Denyer in both 20 minute sessions.

Lester will join forces with Graeme Smyth for the weekend’s two 60 minute contests.

Championship leader Nathan Antunes maintained his strong form to secure third on the grid although the Beechwood Audi R8 driver was 0.7s adrift of the leading Ferraris.

Factory Audi driver Christopher Mies struggled to match the speed of the pace-setters which left him to settle for fifth spot in the Jamec-Pem Audi R8, he shares with Ryan Millier.

The Nurburgring 24 Hour winner was a second adrift of the Lester Ferrari and only fractionally ahead of the Erebus Motorsport Mercedes AMG SLS GT3 of Morgan Haber.

The AMAC Motorsport Porsche of Andrew Macpherson and Brad Shiels rounded out the top 10.

The first of the weekend’s Australian GT Championship races will begin at 1655 on Saturday afternoon.