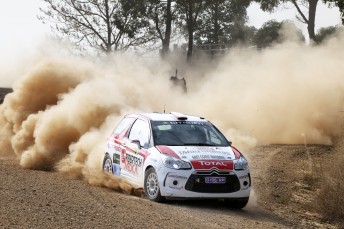 Eli Evans bounced back from his Power Stage crash to open up a healthy lead on the opening day of the Rally Australia round of the Australian Rally Championship.

The Victorian’s efforts from the day’s eight stages has seen him open up a 48.7s lead over Steve and Brent Mackenzie with Molly Taylor and Bill Hayes in third.

“I’m building a stable relationship back up with the car,” said Evans at the day’s final service.

“The car has more moans and groans than The Endeavour!

“But I’m happy, it’s been a cautious day, I’ve built up my pace and I finish the Leg in a good position,” he added.

Following his Power Stage victory, Simon Evans started the day on the front foot as he and Ben Searcy guided their Honda Jazz to victory on the opening stage.

Eli Evans won four of the next five stages with his run only broken by his brother’s win on the second run through Bakers Creek.

While Eli went on to build a healthy lead, his sibling’s charge came to a halt on the final stage when he suffered a suspected blown engine.

The mechanical drama allowed the Ford Fiesta of Mackenzie to move into second, with Taylor and Hayes slotting into third more than two minutes adrift of the leader.

The second Leg of Coates Hire Rally Australia features just four stages including two runs over the mammoth 50.80km Nambucca, before tackling the 7.94km Valla stage in the dark to end the day.

VIDEO: Wrap of the Day