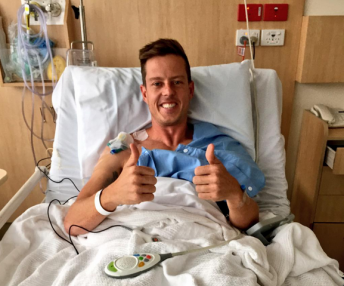 James Courtney in hospital on Thursday. pic via twitter

James Courtney returned to hospital on Thursday as part of ongoing efforts to speed up his recovery from injury.

The Holden Racing Team has issued an official update on Courtney’s condition this morning following news earlier this week that the damage to the driver’s ribs is worse than previously thought.

A scan on Monday revealed that the 35-year-old has five broken ribs instead of the originally diagnosed three, which has cast serious doubt on his ability to recover in time for Bathurst.

The team is however talking up the prospect of a Bathurst return for its star driver, stressing progress made in recent days as a reason for optimism.

“After the scans James went to see a thoracic surgeon and it was recommended he undergo further pain treatment to assist the recovery process,” read the HRT statement.

“A nerve blocker has been injected into his spine to ease the pain and allow him to move and breathe more easily. This will also help reduce the risk of him developing pneumonia.

“James will again be seeing the thoracic specialist today to work on different recovery methods to ensure he is fighting fit for Bathurst.

“While the above sounds quite dramatic, the team is fully focussed on James’ recovery and is ensuring he receives the best medical care available.

“If all goes to plan the current medical advice suggests no reason why James won’t be taking his place on the grid at Bathurst.”

Walkinshaw Racing managing director Adrian Burgess told Fox Sportss during this morning’s Sandown practice that repairing the soft tissue damage around the ribs may take the most time.

“The poor kid still has a lot of pain,” he said.

“We put him back into hospital yesterday to administer some more affective pain relief for him to enable him to breathe and use his lungs properly.

“The ribs are starting to heal but there’s a hell of a lot of soft tissue damage and that’s probably going to be the bigger problem to fix.”