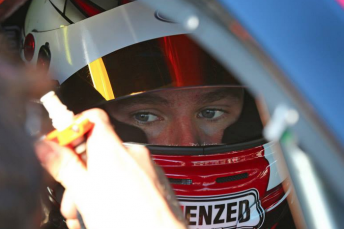 Cameron Waters drove Chaz Mostert’s Ford to the fastest time in the first of two co-driver practice sessions for the Sandown 500.

Waters traded the top spot with team-mate Steve Owen and the Volvo of Chris Pither in the closing stages of the 30 minute session.

The Dunlop Series leader ended up as the only driver in the 1:09s, stopping the clocks with a 1:09.91s best.

“Chaz rolled out this morning and the car was pretty good so we’re just building on that,” said Waters.

“To go quickest in the co-driver session is awesome but Sunday is the day that you’ve got to be at your best.”

Kiwi Pither’s session included a wild moment at Turn 3, where a tap from Dean Fiore’s Nissan required quick reactions to keep the Volvo off the outside fence.

Luke Youlden endured two major offs at Turn 1 after left-front lock-ups on his way to 18th.

The Holden Racing Team’s Russell Ingall spent a fleeting moment at the top of the order before ending up 21st.