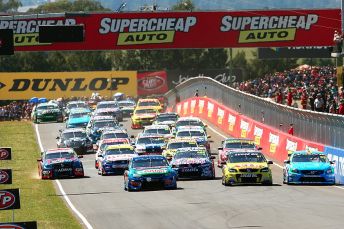 New gear ratios are expected to increase speeds at Bathurst

The V8 Supercars Commission has approved changes to the final drive ratios used at Sandown and Bathurst in a move that will bring higher top speeds at both venues.

The changes have been made in a bid to decrease engine damage caused by running for too long on the 7,500rpm rev limiter and increase the potential for passing.

Particular interest will now centre around top speeds at Bathurst, where the cars are expected to break 300km/h.

“To see drivers break the 300km/h barrier as they charge down Mount Panorama will be exciting for fans and drivers and add another dimension to what is already one of Australia’s biggest sporting events,” said V8 Supercars sporting and technical manager David Stuart.

“It will also provide additional passing opportunities at the end of both Mountain Straight and Conrod Straight and only add to the excitement of the race.”

The effect on acceleration at both venues and therefore ultimate lap times remains unclear.