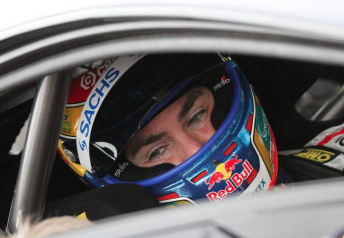 A hearing took place at Sandown this evening following nose-to-tail contact between Lowndes and Mark Winterbottom that sent the latter’s Falcon off the road at Turn 2 midway through the 200km Sydney encounter.

The Red Bull Holden went on to finish 10th, while Winterbottom limped home 16th after suffering steering damage due to a subsequent clash with Andre Heimgartner.

Lowndes, Winterbottom and respective team representatives Roland Dane and Chris O’Toole all attended the hearing in the Sandown paddock, along with Investigating Officer Jason Bargwanna and a panel of three stewards.

Bargwanna had initially investigated the incident in Sydney but elected not to refer the matter to the stewards, triggering the protest from Prodrive.

While the official summary of the hearing’s outcome has yet to be released, stewards have confirmed to Speedcafe.com no breach of the careless driving rules were established.

Stressing that it has not disturbed his build-up to the Sandown 500, Lowndes says he’s pleased to get the hearing out of the way.

“I’m glad the decision has been made now so that we can get over it and get on with racing.”