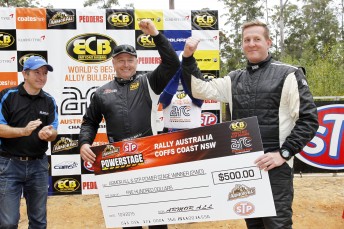 Simon Evans made a strong start to his Rally Australia campaign with victory on the Armor All power stage at the Coffs Harbour event.

The four-time Australian Rally Champion produced a faultless run through the stage to claim victory by 0.3s from the Citroen DSR3 of Tony Sullens, with Molly Taylor clocking a time good enough for third.

While Simon Evans’ Honda Jazz took the victory, his brother Eli Evans failed to finish the stage after a heavy crash.

“I gave it everything” said Simon Evans, who is competing at the Coffs Harbour event for the first time.

“I knew it’d be a massive fight so I went for it. It’s massively disappointing to see Eli crash out, I love racing my brother. It was a tricky corner, I took it easy there on my run.”

The accident for Eli Evans has left his crew with plenty of work to prepare the car for the 7.88km Utungun stage, which kicks off Rally Australia on Friday morning.

Evans’ Citroen suffered heavy damage to the front end after a collision with three tree stumps on the stage.

“I’ve left the boys with a lot of work to do, we have about 19-20 hours to make the start line tomorrow morning. I’ve very much got my tail between my legs,” said Eli Evans.

Peter Roberts and Andrew Crowley starred in the 4WD class to take the stage win behind the wheel of a Mitsubishi Lancer Evo VI.