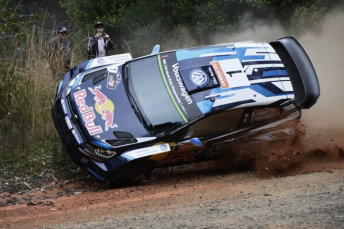 Ogier survived an early moment when he miraculously avoided rolling on his first sweep of the 4.98km shakedown route.

The French ace rode both left-hand wheels, maintaining control around a hairpin bend before the Volkswagen righted itself.

Ogier made several more sweeps of the stage before ultimately finishing 1.1s ahead of his VW team-mate Andreas Mikkelsen with Jari-Matti Latvala third fastest as the Polos took charge.

“Shakedown was good, although we had a little stunt moment on the first corner, on two wheels,” Ogier said.

“Actually like a hairpin, very slow but could have been a roll.

“Luckily the reflexes cut in to open steering in the other direction, like a spin, but after that, I am happy with everything.”

Dani Sordo (Hyundai) and M-Sport Ford driver Ott Tanak shared the same time, ahead of Kiwi Hayden Paddon with Elfyn Evans ninth while Stephane Lefebvre was 10th as he comes to grips with the Citroen DS 3 following his 11th hour call-up to replace the injured Mads Ostberg.

Competitive stages begin tomorrow with a return loop of four stages which includes new routes around the Taylors Arm region.