Ingall to undertake co-driver sessions in #22

Ingall to undertake co-driver sessions in #22 The Ingall and Perkins names have reunited for Sandown

Russell Ingall has officially been nominated as the co-driver to Jack Perkins in the Holden Racing Team’s #22 Commodore for the Sandown 500.

The 51-year-old was drafted into the squad following the injury sustained to James Courtney at Sydney Motorsport Park a fortnight ago.

Perkins had been due to be Courtney’s co-driver, but has been elevated into the primary slot in place of Courtney.

All drivers are permitted in opening practice tomorrow before two dedicated sessions for the co-drivers.

Saturday also sees co-drivers and primary drivers split, with a 60km race held for each.

Like Perkins, Ingall competed full-time last year and stresses that there are ‘no egos’ in the team.

“We know each other really well and there’s no egos, we’re both not auditioning for drives,” said Ingall, who drove the car for the first time at the team’s Winton test last Thursday.

“We’re out there to do the best for the team and the #22 HRT car, that’s the most important thing.”

Perkins, who raced in Courtney’s place in Sydney, is confident that the entry can figure strongly this weekend despite the forced driver change.

“Everyone at HRT goes racing to win and that hasn’t changed even though James isn’t in the car,” he said.

“We’re pushing really hard to get the best results we can.

“Given the circumstances we’d probably take a top 10, but we’re there to win.

“Russell wants to win and has a few scores to settle and I’m out there to do the best job I can as well.” 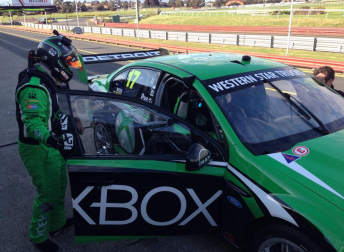 Courtney is currently in doubt for Bathurst due to the extent of his injuries, but remains hopeful that he can return for the October 8-11 event.

Ingall’s position as co-driver will meanwhile see him square-off against old team-mate and rival Marcos Ambrose in the Saturday sprint.

The duo traded paint at last year’s Sydney 500, which marked the only time they have shared a track since Ingall’s title winning 2005 season.

While the spotlight will be on the Tasmanian upon his return, Ambrose says he’ll be happy to take a back seat to primary driver Pye.

“My role is quite clear at Sandown and all the endurance races,” he said.

“I will be supporting Scott in every way possible and as a driver pairing I think we are in good shape.

“We have the car set up close to the way we both like it, the compromises in the cockpit are not too bad, and I have watched every race closely this year and can see the progress that has been made.”