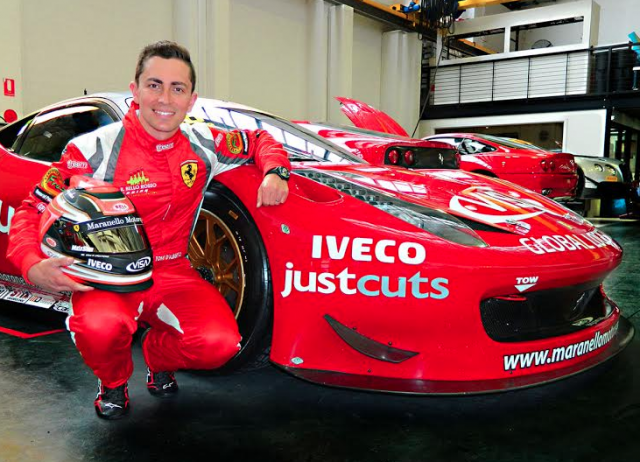 D’Alberto is the only driver racing in both the V8 Supercars and GTs this weekend, teaming with Tim Slade and Grant Denyer in the respective categories.

Originally intending to contest all six GT rounds, D’Alberto missed the season opener in Adelaide after a Bathurst crash, before the impending birth of his first child kept him from the track last time out at Sydney Motorsport Park.

While D’Alberto is ninth in the standings, a win for Denyer in Sydney has the television personality third, less than 100 points from leader Nathan Antunes.

“Over the years, I haven’t had to do too many rounds where I’ve been on double duties, but I’m really looking forward to it,” said D’Alberto.

“I’ve been competitive at every Australian GT round I’ve raced at this year and we’re aiming to keep that going at Sandown.”

The Ferrari has received additional support from truck firm Iveco for the final two rounds of the GT season, adding to the primary Just Cuts backing brought by Denyer.

Australian GT competitors will get one practice session and two qualifying hit-outs tomorrow, before 60 minute races on Saturday evening and Sunday morning.

D’Alberto meanwhile heads to Sandown as a co-driver to Slade for the second straight year and hopes to improve on the duo’s 12th place from 2014.

“We got a podium at the Gold Coast last year, and I feel we’re working together as good as ever,” he said.

“There’s no reason we shouldn’t be aiming for the top five at Sandown, and hopefully a few things go our way and we end up on the podium.”