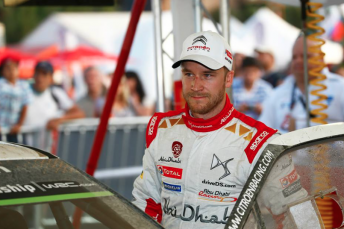 Mads Ostberg has pulled out of Coates Hire Rally Australia as a result of his crash during Tuesday’s recce.

The factory Citroen driver had received medical clearance to compete at the Coffs Harbour World Rally Championship round but the Norwegian ace has withdrawn from the event after sustaining two cracked ribs.

“We continued the recce but it is impossible for us to contest the rally,” said Ostberg.

“It’s a big disappointment because we thought we’d be competitive and fight to reclaim second place in the world championship.”

Last season’s Junior WRC champion had travelled with the Citroen squad to Australia to take part in the recce, while Prevot sat alongside Australian Chris Atkinson in the factory Hyundai at the event last year.

“I really feel gutted for Mads and Jonas and I hope they will quickly be back on their feet,” said Lefebvre.

“I have never driven the DS 3 WRC on gravel and am expecting a complicated weekend.

“Normally I prepare for a rally several weeks ahead, watching onboard footage from previous editions to get used to the stages.

“This won’t be possible but all experience is good and I thank Citroën Racing for its confidence.”