Speedcafe.com’s Stefan Bartholomaeus sat down with father and son duo Ben and Allan Grice to talk about the former’s debut in the V8 Ute Racing Series.

The 25-year-old Ben steps into the Utes at Sandown this weekend, 10 years after his two-time Bathurst winning father last competed in the category.

SPEEDCAFE: Ben, tell us about how this deal has come together to join the V8 Ute field at Sandown.

I recently won a one hour race out at Queensland Raceway and they were pretty impressed.

It was a two-driver race and I managed to get in and stay in front. I had a cracking scrap with the category hero, which they were pretty stoked about.

They offered me a great deal for Sandown that I couldn’t resist. Grice will run a Holden Ute at Sandown

I had a test on the Wednesday (in the Ute). I changed a few things, got comfortable and was doing some competitive times with my team-mates.

It’s pretty similar to drive to the Saloon Car, which I’ve raced at Sandown before.

The weekend for me is a matter of keeping the elbows up and not letting anyone push me around. It’s a great opportunity to run with the big dogs.

SPEEDCAFE: Allan, this is another important step in Ben’s career. How have you seen his progression so far?

ALLAN GRICE: If only you could buy experience by the kilo or the litre, it’d be so much easier. But you’ve got to get it the hard way, through the school of hard knocks. It’s the only way.

Talent is only a tiny percentage of what it takes to be a professional racing car driver. It’s determination and experience and being able to put the whole package together.

What Ben got on top of in this Excel race was that he had recognised through talks with me that there is a different mental approach to chasing someone and passing them, which he’s never had trouble with, and leading races. 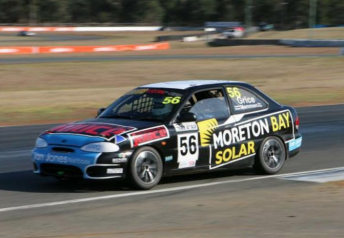 Grice aboard the Excel at Queensland Raceway

When you’re chasing somebody you’re absorbing what part of the circuit you’re better on and where he’s better. You can work on that over a number of laps and size up where to make your move.

But when you do hit the front, you’re it. It’s your race to lose. If you throw it into a corner too quick, miss the apex and get out in the marbles… It’s a different mental approach.

I feel that piece in the puzzle fell into place at the last meeting.

SPEEDCAFE: When someone with your history has a son that wants to go motor racing, there’s a couple of different ways you can approach it. How involved and encouraging have you been of Ben’s racing?

ALLAN GRICE: From day one I haven’t encouraged him to go motor racing, but I haven’t discouraged him either. It’s been totally his decision.

I’d say 99 percent of the time he listens to advice, which is a pretty high percentage for a father-son relationship.

SPEEDCAFE: That experience includes a spell in the V8 Ute category. Have you got any particular advice for Ben jumping in there? It was probably a bit different when you were in it. It was pretty wild in those early days. Grice leading the way in the Saloon Cars

ALLAN GRICE: Yeah, it certainly was. I don’t think there’s any particular specifics about any category, the fundamentals are the same.

Each category throws up its own problems. Front-wheel drive, rear-wheel drive, too much power, not enough… you’ve got to assess it and drive around whatever weakness the package has.

There’s no such thing as the perfect car and any driver needs to realise that. You’ve got to find its strengths and maximise those.

There was another phase Ben went through when he’d been charging corners, entering too fast, too sideways and he’d kill his exit speed. He’s completely reversed that now.

He gets on the power early and gets off corners quicker than most around him. That’s a learning process where again, you couldn’t buy that experience and knowledge, you’ve got to get there yourself.

BEN GRICE: That’s the coolest thing about having cameras.

We never had much experience in the categories I’ve been in with data, but dad and I have been watching footage together of me driving laps by myself and racing. We can bounce ideas off each other and help refine every little bit that I need to work on. Often he’ll tell me in racing that I’m being a bit soft or lenient on the other guys.

Professional athletes in just about every other sport you can think of have a coach, but racing drivers generally don’t.

That’s where dad and Les Small as well, who is working with us on the Saloon Car and with the Ute, are really helpful. I’m just absorbing as much of their experience as I can.

ALLAN GRICE: When you look at the Wallabies, for example, they’ve got an attack coach, a defence coach and so on. It’s the same with cricket, golf and everything else.

It’s ridiculous that in motor racing, 99.9 percent of the drivers have nothing. It makes no sense to me.

SPEEDCAFE: Ben, you tested a Kumho V8 Touring Car a couple of months back. Are you still looking at getting into a V8 Supercar next year, or is Utes now the focus?

GRICE: It’ll be good to get a taste (of Utes) and see where we end up.

It’s all about getting the budgets together. We’re really lucky to have the support that we do at the moment and these partners have decided to back it.

At this stage I don’t really know where we’ll be next year. I’m just focussing on the weekend ahead. 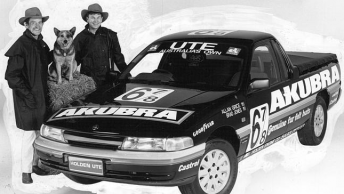 SPEEDCAFE: Allan, is Ute racing something you look back at fondly? You competed not only in the V8 Ute Series, but also in the 1992 Bathurst 12 Hour, which a lot of fans still remember.

GRICE: Yeah, it is. That program (B12H) could have gone a whole lot better too, it was one of those things that got away.

The people who built the fuel tank didn’t clean the foam out properly and we continually picked up bits of black foam in the injection system and had to keep stopping.

That as a surprisingly quick car at that time. BMW flew a 5 M Series out from Germany at that stage and I really enjoyed passing it down the straight at Bathurst.