Almost three weeks have passed since James Courtney was struck down by pit equipment disturbed by a low flying Navy helicopter at Sydney Motorsport Park.

CLICK HERE for Speedcafe.com’s news story on the latest development.

In this extended interview, Courtney explains dealing with the day-to-day pain of his injuries, his quest to make Bathurst and the frustration of another championship tilt gone begging.

SPEEDCAFE: James, what has day to day life been like since you returned home to the Gold Coast?

JAMES COURTNEY: I can get around. During the day is probably the easier bit, because while you’re standing there’s no weight on your chest. When you’re moving your arms or twisting though it starts to hurt.

At the moment, if you sit down and lean back or lay down it’s just a nightmare. Breathing is still very, very shallow because your body is trying to protect the rib movement.

But if I don’t breathe heavily enough and don’t use my lungs as much as I can, then they said there’s a chance I’ll get pneumonia from a fluid build-up in the lungs.

There’s quite a bit going on and it’s not stuff I want to be dealing with. Courtney pictured four days after the accident, preparing to leave hospital in Sydney

SPEEDCAFE: Is there a clear recovery process from here?

COURTNEY: I have to continue to get my right lung scanned because there’s some inconsistencies in it that they want to keep monitoring.

That’s the more important part at the moment, making sure that I don’t have any more issues because if I try and exert myself it can cause more damage.

So I’m trying to take it very, very easy and once I’ve got the all clear from the lung side of things then we’ll be waiting for the bones.

They’ve said it’s a long process because they’re bones that are working all the time, you can’t immobilise them like you can with an arm or a leg in a cast. Just breathing is effecting its healing.

The doctor said it’s just time and you can’t do anything for it. We’re just kicking our heals about and trying to get scanned every week.

That’ll give us a visual on the progress, but it’s a long process for ribs. You can’t just say it’s four or six weeks. It could be quite a length of time.

SPEEDCAFE: Is there anything that you can do to speed the process up, be it hyperbaric chambers or anything like that?

COURTNEY: Not really. I can’t do any pressurised stuff because of the lung damage. If we put any pressure on it it will collapse.

If the rib cage was broken in one part the others would hold it together, but the fact it’s broken on the back and the side explains why I’m in so much pain when laying down or leaning against something.

When I’m driving I can’t use my right arm and I can’t even lean back on the seat. It’s the same when I’m watching TV at home, I’ve got to be leaning forward.

I just pain killer up, go to sleep and then wake up in agony, whack some more in and then go back to sleep again. It’s very unpleasant.

Carys (wife) is hating it too because I’m a horrendous patient and I can’t race the car and get rid of the aggression that I build up. 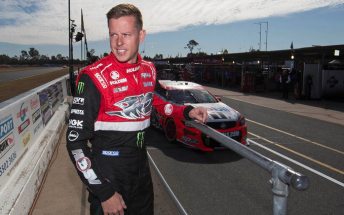 Courtney hasn’t given up on returning for Bathurst

I’m also a horrendous passenger in the car, so if we go anywhere, I’m feeling every bump.

As you do, you attack those you have closest to you, so I’ve been snapping at her a lot.

It’s bad for the kids too. Zara (7) understands but Cadel (5) doesn’t get why I’m not kicking the ball with him or whatever. I’m just sitting there and he’s hating it.

The Father’s Day breakfast in bed didn’t go too well either because I can’t sit up in bed.

It’s just a shit feeling, because I can’t do anything for my family or the team or anyone that relies on me.

SPEEDCAFE: With Bathurst only four weeks away now, are you resigned to the fact that you’re probably going to miss it?

COURTNEY: I’m still trying to get ready for it. It’ll be seven weeks from the accident to Bathurst, which is quite a length of time. Four weeks is still a long way away.

Phil (Young, trainer) is going through what he’s done previously with all the other drivers he’s worked with in Europe and is trying to come up with solutions to assist in the bones healing faster

I’m working with Phil on what options we have. We’ll do the best we can to speed up the process.

Unfortunately to this point I’ve been flat out doing nothing, just watching a lot of Gold Rush on Foxtel. Keeping myself entertained is half the battle.

SPEEDCAFE: You’ll at least have some V8 Supercars on TV this weekend if you can bear watching it.

COURTNEY: I’ll be watching, don’t worry. I’ve got to make sure The Muscle (Russell Ingall) and Jacko (Jack Perkins) are getting on with it.

But it is hard to take, missing out on two events (Sydney Motorsport Park and Sandown).

Even though we had a gap to Mark (Winterbottom, points leader) in the championship, I still thought we were a strong chance with Jack onboard and with the way our car has performed in the longer races.

We were second at Sandown last year and I thought it was our time to shine. It’s massively disappointing that we can’t take it to them and try and chase those blokes down. 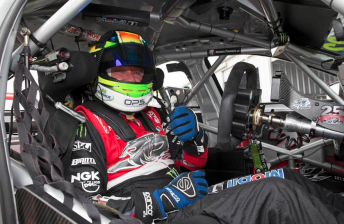 SPEEDCAFE: It must be even harder to deal with considering how it’s all happened. It’s not like you crashed the car and did this yourself.

COURTNEY: Exactly. I was only talking with Carys about it yesterday. The three biggest injuries in my life that have taken me out of races were all out of my control.

The Jaguar (2002 testing crash in a Jaguar Formula 1 car at Monza) was a rear suspension failure.

The incident with Alex (Premat, Phillip Island, 2013) his tyre went down and I didn’t even know the hit was coming.

It would be easier to take if I’d brought myself undone. To be taken out through something like this is tough.

SPEEDCAFE: Have you had any more communication with V8 Supercars or the Navy over what’s gone on? Are you looking at what action you can take?

COURTNEY: I have some close mates at V8 Supercars that I talk to all the time on a personal level, but officially, James (Warburton, CEO) came and saw me on the Monday after the accident.

The head of the Navy squadron then came up last week to see me and apologised. It was good of them to do that, but it is what it is.

There’s a lot of investigations still going on about it and it’s going to be interesting seeing what comes out of it all.

My job though is to get healthy which is what I’m concentrating on and Alan (Gow, manager) will look after the other side of it.