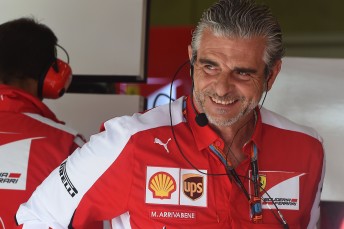 Ferrari would welcome the possibility of becoming an engine supplier to Red Bull Racing according to team boss Maurizio Arrivabene.

Red Bull appear to be in the market for a new engine supplier for the 2016 season after reports the team is to sever its contract with Renault a year early following a raft of performance and reliability issues.

Ferrari supplied engines to the Red Bull in 2006 prior to signing a deal with Renault, while its sister outfit Toro Rosso had an arrangement with the Maranello team from 2007-2013.

“Red Bull have big names, with Adrian Newey as chief designer, and it is easy to think if you give them the engine they will build a scary chassis, which means they will be really competitive,” said Arrivabene.

“My team, my engineers and aerodynamicists know their jobs. For that reason I don’t have a problem and competition is nice when you have a stronger competitor.

“This doesn’t mean tomorrow morning we will give our engines to Red Bull but I don’t see any problem to give our engine to any other team or be scared of the competition before they start.

“This is not the right spirit of competition, of what Ferrari represents. We fight with everybody.”

Mercedes boss Toto Wolff downplayed the possibility of a Red Bull tie up outlining the negative aspects of such a deal last week.

“If I judge it from the perspective of our team, it is an agreement that you should not do,” said Wolff.

“Our car and our successes are the result of hard work and huge investment from Daimler.

“We built our supremacy, while today there is a team that has decided that they do not want to stay with their partners. It is a different philosophy to ours.

“Nothing has happened yet, because we do not look so much at the possible benefits of the deal, as to the negative arguments that are likely to be more for our team.”