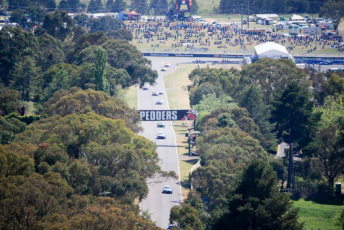 Bathurst will get underway at 1100 this year

A schedule released today for the Supercheap Auto Bathurst 1000 has confirmed minor changes to the race’s start time and practice session lengths.

The race start has been pushed back by 30 minutes to 11:00am local time, marking the latest kick-off in the event’s history.

Unlike all other Sunday V8 Supercars races throughout the season, the Bathurst 1000 has no time certain cut-off, with broadcasters committed to televising the race through to its conclusion.

A total of 20 minutes has however been clipped from the track time, with each of the four full field sessions reduced from 50 to 45 minutes.

The V8 Supercars Sunday morning warm-up will start 30 minutes later than previously at 8:20am in line with the start time change.

The Dunlop Series, Carrera Cup, V8 Utes, Touring Car Masters and Aussie Racing Cars are again all on the support program, with the pint-sized ARCs this time receiving four races instead of three.

V8 Supercars meanwhile confirmed today the addition of two Peter Brock cars to its City of Bathurst Bicentenary Display at the October 8-11 meeting.

The #43 Holden Dealer Team Holden Monaro from 1969 and #05 Holden Commodore VL from 1987 will both feature in the festivities.

Brock combined with Des West to finish third on debut in the Monaro, while the Commodore failed early in the 1987 race, prompting Brock to switch to the eventual race winning #10 entry.

Today marks nine years since Brock was killed in a crash on the Targa West rally.