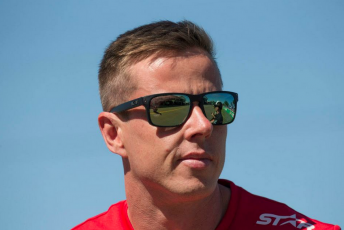 V8 Supercars star James Courtney faces the prospect of an extended period on the sidelines following news that the injury he sustained at Sydney Motorsport Park is worse than previously thought.

While a punctured lung is healing as hoped, a CT scan yesterday revealed that Courtney has five fractured ribs, which is two more than had originally been detected.

The injury occurred when Courtney was struck by pit equipment blown into his path by a low flying Navy helicopter at SMP on August 21.

Already set to miss this weekend’s Wilson Security Sandown 500, the 35-year-old has an uphill battle to make the Supercheap Auto Bathurst 1000 on October 8-11.

“I’m a little bit upset with the findings,” Courtney told Speedcafe.com of the latest scan.

“To go from it being three to five has just about doubled. It was a surprise to all of us to be honest that there was more damage than what we were previously told. I’m disappointed.

“They’ve said it’s going to be a long process because they’re bones that are working all the time when you breathe. You can’t immobilise them like you can with an arm or a leg in a cast.

“It’s not a case of just saying it’s four or six weeks to recover. It could be quite a length of time.” Courtney after his latest scan on Monday. pic: James Courtney via instagram

Courtney currently enjoys limited mobility due to the nature of the injury and can take only shallow breaths without enduring pain.

“If the rib cage was broken in one part the others would hold it together, but the fact it’s broken on the back and the side explains why I’m in so much pain when laying down or leaning against something,” he said.

“When I’m driving I can’t use my right arm and I can’t even lean back on the seat. It’s the same when I’m watching TV at home, I’ve got to be leaning forward.

“I just pain killer up, go to sleep and then wake up in agony, whack some more in and then go back to sleep again. It’s very unpleasant.”

Despite the grim scenario, Courtney has not given up on making Bathurst and is working closely with trainer Phil Young on ways to speed up his recovery.

“Four weeks is still a long way away,” he said.

“Phil is going through what he’s done previously with all the other drivers he’s worked with in Europe and is trying to come up with solutions to assist in the bones healing faster.”

Although the lung damage ensures Courtney is unable to use a hyperbaric chamber to assist his recovery, Young told Speedcafe.com that there are other options being explored.

“Where the injury is, there’s not much you can do about it,” admitted Young, whose Gold Coast-based GP Human Performance firm specialises in motorsport.

“It’s a lot about time and how each individual reacts to it. Some will heal faster than others and obviously James is young and very fit, which will help.

“We’re going to look at a couple of ways to try and speed things up. One is like a low intensity ultrasound and the other is a modality chord shockwave therapy.

“We’ll just have to play it by ear and see how we go. Time is the only guaranteed healer.”

Young, whose experience includes a stint in Formula 1 working with the likes of Jenson Button, says only time will tell if a Bathurst return is possible.

“There’s always a chance, it’s still what we’re striving for,” he said.

“We’ll give him every opportunity to make the grid, but we just have to take each week as it comes.

“He’s obviously itching to get back, but we certainly won’t risk his safety just for the sake of doing Bathurst.

“We’ll make a sensible decision as to whether he can do it or not.”

Russell Ingall will replace Courtney at Sandown this weekend and is understood to be on standby for the remaining Pirtek Enduro Cup events at Bathurst and the Gold Coast.