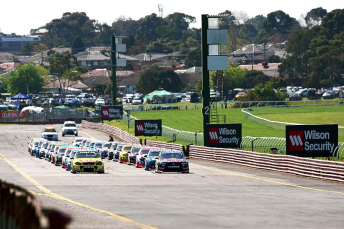 This week’s Pirtek Poll asks, who will win the Wilson Security Sandown 500?

The start of the Pirtek Enduro Cup brings with it a raft of variables, including the 25 co-drivers set to join the fray.

Prodrive enters the endurance events as the form team, with its key line-ups of Mark Winterbottom/Steve Owen, Chaz Mostert/Cameron Waters and David Reynolds/Dean Canto all looming as strong contenders.

The Fords will however face a resurgent Triple Eight, which has won the 500km Bathurst warm-up in each of the last five years.

Jamie Whincup and Paul Dumbrell head to Sandown gunning for an unprecedented third consecutive triumph in the event, boosted by the former’s recent drought breaking success in Sydney.

Craig Lowndes is meanwhile an eight-time winner of the pre-Bathurst enduro and, partnered by Steven Richards, is out to continue his trademark endurance form.

The Holden Racing Team filled two of the podium places at Sandown last year but is now largely dependent on its Garth Tander/Warren Luff entry following the recent injury to James Courtney.

The Fabian Coulthard/Luke Youlden BJR Holden is among many other outside threats, but will need to reverse a run of ill-form at the Melbourne venue in order to find success.

Who do you think will come out on top in the first endurance race of the season? Cast your vote below on this week’s Pirtek Poll.