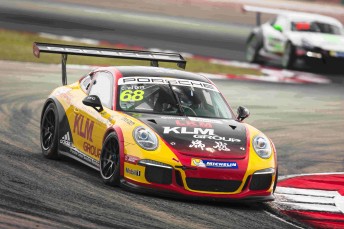 German Nico Menzel and Kiwi Chris van der Drift shared the spoils in the latest round of the Porsche Carrera Cup Asia at Sepang.

A three way scrap for the lead dominated the proceedings in the weekend’s first race with early leader Martin Ragginger under pressure from Menzel and Rodolfo Avila.

In the end, the 17-year-old Menzel managed to get the better of the pair to take the victory by 1.4s from Ragginger.

Kiwi duo of Craig Baird and van der Drift came home in third and fourth while Avila had to settle for fifth following his unsuccessful move on Ragginger.

Van der Drift bounced back in the second race as he secured his seventh win of the season to further extend his championship lead.

Despite the introduction of the Safety Car, the New Zealander controlled the race after the restart to take the win by 3s from Ragginger with Menzel third and Baird fourth.

Van der Drift leads the championship with a 15 point margin over fellow countryman Baird ahead of the Singapore Formula 1 Grand Prix round from September 18-20. 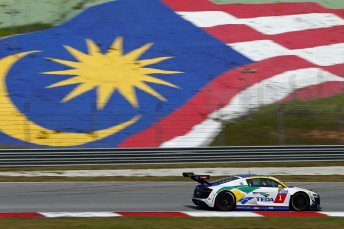 Former Formula 1 driver Alex Yoong has taken the lead of the Audi R8 LMS Cup after recording a victory and a fourth place finish at Sepang.

A strong getaway from third on the grid saw Yoong leap into the lead on the opening lap of the weekend’s first race.

The Malaysian went on to control the race as he eased to the chequered flag with a 2.8s margin over Marchy Lee.

Yoong led the early stages of the second heat before he was overhauled by Frey, Lee and Cheng.

Frey held the lead until lap 5 when Lee swept past the former DTM driver.

Lee was unable to relax out in front as Cheng soon applied pressure on the leader, but the former held firm to take the chequered flag.

Frey finished in a comfortable third with Yoong picking up points in fourth to open up a three point lead at the top of the standings.

The Audi R8 LMS Cup heads to Japan’s Fuji Speedway for the penultimate round from October 10-11. The BBT Ferrari 458 of Davide Rizzo and Anthony Liu took victory in the Sepang 3 Hours to boost their GT Asia Series title hopes.

A strong opening stint from Darryl O’Young saw the Craft Bamboo Racing Aston Martin lead the majority of the opening hour but it wasn’t enough to halt the charging Rizzo/Liu Ferrari.

Despite changeable conditions, the BBT Ferrari took the chequered flag after 72 laps from the championship leading Absolute Racing Bentley Continental of Adderly Fong and Keita Sawa.

The Clearwater Racing Ferrari 458 of Mok Weng Sun and James Calado reached the finish in fourth ahead of Carlo Van Dam and Piti Bhirom Bhakdi, who were the only other entry on the lead lap.

Sawa and Fong lead the championship by two points from Liu and Rizzo, with O’Young two points further back in third.

China’s Shanghai International Circuit will host the the next round of the championship from September 27.