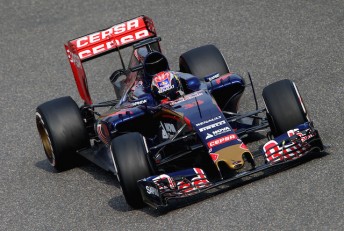 The grid for the Italian Grand Prix has been amended following post qualifying penalties for Max Verstappen and Marcus Ericsson.

Toro Rosso’s Verstappen will now occupy the last spot on the Monza grid after failing to post a time in Q1 due to a late Renault engine change.

The Dutchman has been issued with a 20 place grid penalty for a double power unit switch, while an extra 10 place penalty has been added after his team broke the seals on another engine.

Verstappen will also serve a drive-through penalty at the start of the race following an unsafe release from the pits prior to his one and only installation lap in qualifying.

Sauber driver Ericsson will drop from 10th on the grid to 12th position after the FIA ruled the Swede impeded the Force India of Nico Hulkenberg during a flying lap in Q1.

Ericsson has also been issued with two penalty points on his licence as result of the incident.

As a result of the penalty, Lotus’ Pastor Maldonado moves into P10 while Sauber’s Felipe Nasr will start from 11th position.