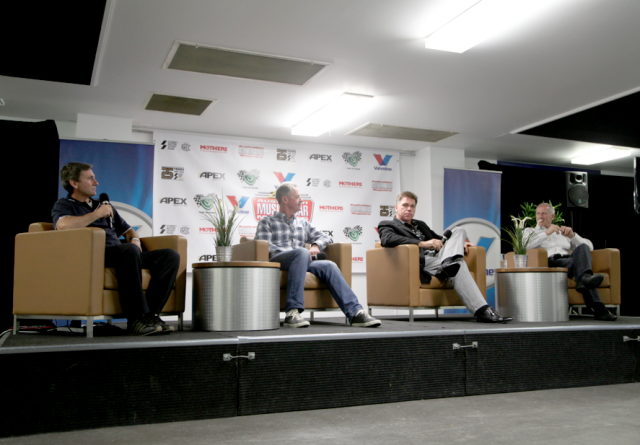 From left: Seton, Longhurst, O’Brien and Miedecke on stage at the MCM legends dinner

The 25th anniversary of the first major motorsport event at Sydney Motorsport Park has been celebrated at the annual Muscle Car Masters Legends dinner.

Four competitors from the 1990 Nissan Sydney 500, Glenn Seton, Tony Longhurst, Charlie O’Brien and Andrew Miedecke, shared their memories of the race with the attending guests.

Held on November 10, the race was won by the Holden of Larry Perkins/Tomas Mezera, which had been fending off a charging John Bowe when the Ford driver’s engine blew in the closing laps.

All four of the guests were Sierra mounted for the race, which came at a time when the four cylinder turbocharged machines were the car to have in the sprint races. 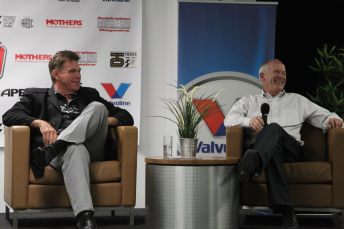 “The Sierras had so much power, the speeds down the straight were the same as the current V8 Supercars,” reflected Longhurst, who would trade his Sierras for BMWs at the end of the season.

“They used to fry the tyres out and you had to be brave. I spent a lot of time in the cars and just adapted to them.

“They were absolutely weapons. Six hundred horsepower and 1100kg, they’d probably overtake half the field now.”

Miedecke and O’Brien were both in Peter Brock’s Mobil team for the race, but the former almost didn’t make the start due to ill health.

“I had a bad ear infection that got worse and worse from Thursday onwards,” explained Miedecke, who recently bought the #05 Sierra to add to his collection of race cars.

“By first thing Saturday it was so bad that I went to a private hospital in Bondi to have the pressure released. I was pretty determined to get back to the track and do the race.”

As pointed out by dinner host Aaron Noonan, Neil Crompton had been on standby to replace Miedecke, cutting laps in qualifying before ultimately missing out on a start. 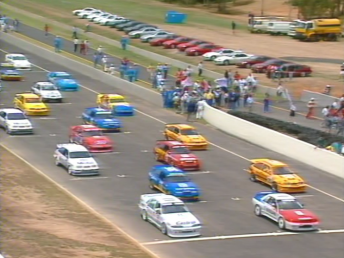 The now V8 Supercars commentator was at the circuit after a call-up from Fred Gibson’s Nissan team due to concerns over Mark Skaife’s health following a recent crash in Adelaide.

Crompton missed out on that drive too, with Skaife deemed fit enough to share the pole-sitting GT-R alongside Jim Richards, which retired with an engine problem after 51 laps.

Elsewhere for O’Brien, the weekend was a tough reminder of who was boss at Mobil 1 Racing.

“Driving in Peter’s second car, it was always set up for Peter,” said O’Brien.

“So it wasn’t really a fun weekend where you could get your teeth around the car and set it up for yourself.

“It’d have to be tested by Peter and that’s how it stayed. If it ploughed understeered through seven or eight corners well you’d better adapt to it because that’s what you had to drive.”

The weekend meanwhile saw Seton wrap up the Australian Endurance Championship title and begin a fruitful relationship with the Western Sydney venue.

It was also the end of an era, however, as co-driver of Seton’s second car, George Fury, bowed out of top level circuit racing with a fifth place alongside Drew Price.

“I really had a lot of respect for George because when I first moved to Nissan he taught me a lot and was always very, very fair,” said Seton.

“We got on really well as team-mates and to be able to have him as part of my team later on in life, it was good to rekindle the relationship.

“It was sad to see George step away from motorsport. He got to the point where he didn’t want to do it any more and because he was such a true racer, he could never be a spectator.

“I really think that looking back on his career he’s a bit of an unsung hero. He was a very, very good driver.”

Seton and Miedecke are both on track in the Touring Car Masters this weekend, with the former also driving in Group Nc.

O’Brien is racing in the Trans-Am Series, winning Saturday’s opening two races aboard his Pontiac Firebird.