James Sera doubles up in Newcastle

James Sera doubles up in Newcastle 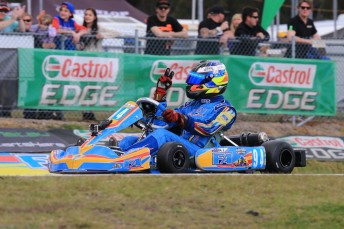 James Sera crossing the line for victory in Newcastle

Victorian Karting veteran James Sera has taken two huge victories at the fourth round of the Australian Kart Championship presented by Jayco and Castrol EDGE in Newcastle.

The star has positioned himself to add another two Australian Championships to his extensive CV come the end of the season. He took a dominant win in the X30 category, however was pushed right to the finish in the KA1 Championship class by Series debutante Dean O’Brien and his closest rival in the Title chase, Justin Francis.

Jack Doohan the son of five time World Motorcycle Champion, Mick Doohan has all but been guaranteed his maiden Australian Karting Championship despite not finishing the KA Junior final.

His Championship lead is almost unassailable heading to the final round in Geelong, although the weekend didn’t go the way of the young Gold Coaster. His KA Junior category went the way of Jack Winter who won when officials had to take the results back a lap when a final lap incident necessitated a red flag.

CRG Australia’s Kyle Ensbey took a grinding win in the KZ2 Final. With Championship leader Jake Klarich striking trouble in the heats on Saturday and Jason Pringle’s run thwarted with an engine issue in the third heat, Ensbey was granted pole for the final and he did his most to convert that to a win.

Troy Loeskow came home in second position aboard his Ricciardo Kart – his best ever KZ2 finish and for Kel Treseder – who had Volvo V8 Supercar star, Scott McLaughlin performing crew chief duties – third was as good as a win considering the difficult year he’s experienced.

Canberra racer Zane Morse took a narrow victory in the KF3 final over Thomas Hughes. Hughes – who recorded his third podium in successive events – was superb in defeat – pushing Morse right to the end of the 25 lap final.  Cody Brewczynski recorded his maiden podium. He was in the top four for much of the weekend and drove brilliantly to take third place.

Championship leader Jay Hanson has extended his points lead after performing a calculating drive in KA 12. The massive field of young racers put on a wonderful display of driving throughout the weekend. William Seal was able to record a second placed finish after working hard throughout the weekend. Completing the podium was Cooper Webster who was up to his elbows in a final battle that, at times, had up to seven karts swapping positions.

The Australian Kart Championship presented by Jayco and Castrol EDGE now heads to Geelong Kart Club in Victoria for the season conclusion over the weekend of October 30-November 1.