Ricciardo demoted to back of Italian GP grid

Ricciardo demoted to back of Italian GP grid 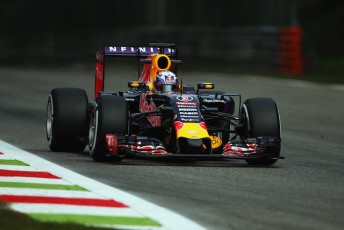 Red Bull Racing’s Daniel Ricciardo will start from the back of the Italian Grand Prix grid following his second power unit change of the weekend.

The Milton Keynes squad elected to make the engine changes to both its cars to eliminate the chances of having to make a power unit switch at the Singapore Grand Prix.

The decision comes after its drivers moved to a sixth Renault power unit prior to Friday practice.

As a result, Ricciardo has been issued with a 25 place grid penalty for a complete power unit change, while Kvyat will incur a 15 place penalty, having elected not to fit a new MGU-K and MGU-H.

Engine penalties coupled with a lack of a power from the Renault unit has left Ricciardo, who suffered a hydraulic problem in Practice 2, resigned to a potentially lonely race on Sunday.

“I think if we can battle anyone with a Mercedes engine, we’re doing pretty good,” said Ricciardo.

“Sauber look pretty good today in terms of competition for us, so if we can be ahead of them and close to some of the Mercs, it’s probably all we could ask for.”

Sainz, who completes his second engine change of the weekend, will be hit with a 20 place grid penalty.

Team-mate Verstappen will move onto a seventh power unit which will see the Dutchman take a 10 place grid drop.

McLaren complete the list of penalties with Jenson Button and Fernando Alonso utilising their ninth power units of the season.