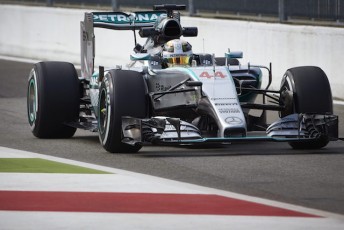 Lewis Hamilton extended his run of consecutive pole positions to seven with another impressive display in qualifying for the Italian Grand Prix.

The reigning world champion dominated the session which saw the Ferrari duo of Kimi Raikkonen and Sebastian Vettel split the Mercedes duo.

Hamilton set the pace from the outset posting a session best 1:23.397s with his maiden run in Q3.

The effort proved to be 0.3s quicker than Raikkonen and Vettel who delighted the Monza crowd to secure second and third on the grid.

Nico Rosberg, who was forced to revert to an older specification engine for the session, was unable to challenge his team-mate as he finished fourth a further tenth adrift of Hamilton.

Williams secured the third row on the grid as Felipe Massa edged his team-mate Valtteri Bottas.

However, Hulkenberg’s Force India came to halt at the entrance of the pit lane after his opening run in Q3.

Sauber’s Marcus Ericsson completed the top 10 but the Swede is under investigation for impeding Hulkenberg on a flying lap in Q1.

Lotus’ Pastor Maldonado and Sauber’s Felipe Nasr will line up in 11th and 12th respectively after missing out on a place in the final segment of qualifying.

Daniel Ricciardo’s engine troubles continued with the Red Bull driver forced to undergo a third engine change of the weekend after suffering a failure on a brand new Renault power unit prior to qualifying.

The Australian will start from the back of the grid alongside Toro Rosso’s Max Verstappen, who incurred a 35 place place penalty for engine changes.

While Verstappen joined the session late due to a power unit switch, team-mate Carlos Sainz ended the session in 13th position, but will start from P15 following his 20 place grid drop for a double engine change.

McLaren will complete the penultimate row of the grid having also undergone power unit changes, with Jenson Button 17th and Fernando Alonso in 18th position.

As a result of the penalties, Manor’s Will Stevens and Roberto Merhi will start from 13th and 14th on the grid.