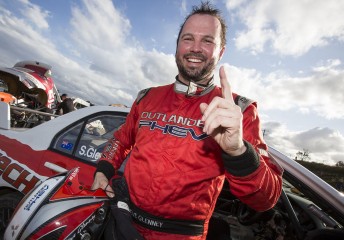 Steve Glenney managed to fend off a hard charging Alister McRae to take victory in the inaugural round of the Extreme Rallycross Championship at Lakeside Raceway.

The South Australian rally convert made the most of his pole position to lead McRae into the first corner before coming under relentless pressure from the Scotsman in the 10 lap 4WD final.

Glenney elected to take his joker lap on the opening tour which saw the Mitsubishi Evo driver open up a healthy lead but it didn’t take long for McRae to close the gap in his Supercar Lite.

The pair produced a thrilling dice for the lead until brake issues halted McRae’s charge. 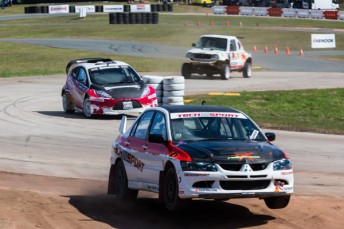 “It’s great to go down in history by being the first winner of Extreme Rallycross and it was great to be racing with Alister McRae,” said Glenney.

“I think there are a few guys competing in other championships with clashes, so once they see the fun we are having I’m sure they will head out and join the grid.”

Anthony Bross brought his Suzuki Jimny home in third ahead of the Subaru of Matt Thewlis. 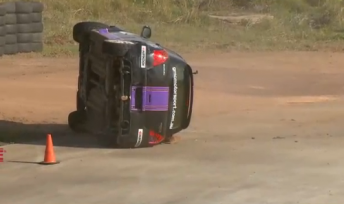 Jason Hore on his side during the 2WD final

Sayers took the victory from Jamie Little with Greg Cox completing the podium in third.

The 10 lap final was restarted after Mitchell Naylor tagged the rear of Jason Hore sending the latter into a barrel roll on the entry to the first gravel section.

Naylor was able to climb out of his car unaided.

Meanwhile, Greg Mammen held off a spirited charge from Luke Page to score victory in the Hyundai Excel class with Steve Hay coming home in third.

The Extreme Rallycross Championship continues with a visit to Victoria’s Calder Park on September 25-26.