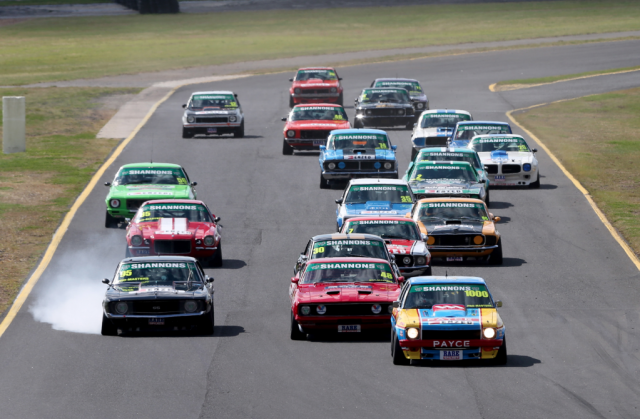 John Bowe led the opening heat from start to finish

John Bowe scored a dominant victory in the opening Touring Car Masters race of the weekend in Sydney as key rivals collided behind him.

Bowe’s team has hailed the win as his 200th career triumph in national and international level motorsport.

The veteran is also celebrating 1,000 career race starts this weekend, which has seen the blue and yellow Torana adopt the #1000 ahead of the milestone, to be reached in the second race.

Both statistics are based off an online database, which operates in the manner of Wikipedia.

“I’m not a big flag waver, but it’s nice,” Bowe told Speedcafe.com after his latest win, which is his 73rd in the TCM.

“There are a lot of people interested. I guess it’s a fairly serious achievement in the life of a boy from Devonport.

“In that race, I came out of Turn 2 with a big gap, which allowed me to drive it smoothly and look after the tyres. It was like a gift from god.”

The Turn 2 chaos had been triggered by contact between Glenn Seton’s Ford Mustang and Andrew Miedecke’s Chevrolet Camaro, which turned the latter around.

The resulting concertina saw the Mustangs of Neil Crompton and Tony Karanfilovski, as well as the Torana of Jason Gomersall take minor panel damage.

Seton spent the remainder of the race holding out Crompton, who took the flag 0.3s behind his former team boss on debut in the category.

Mark King ran as high as third early before falling to fifth aboard his Camaro, finishing ahead of Gomersall, Karanfilovski, Jim Richards (AMC Javelin), Paul Freestone (Camaro) and the recovering Miedecke.

Two further races will complete Round 6 of the TCM at the Muscle Car Masters on Sunday.