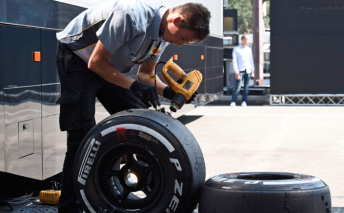 Pirelli has confirmed a combination of track debris and prolonged tyre usage contributed to the high profile tyre failures at the Belgian Grand Prix.

The Italian manufacturer conducted an investigation into tyre blowouts suffered by Nico Rosberg and Sebastian Vettel after attracting heavy criticism for the failures at Spa.

Pirelli has revealed in a statement that while there was an “absence of structural problems” with its tyres they suffered an abnormal amount of cuts during the weekend caused by on track debris.

The investigation reports that Pirelli tyres sustained 63 cuts over the weekend compared to the average of 1.2 incurred during the previous 15 race events.

“Since the start of 2015, 13,748 slick tyres have been used, including on especially severe tracks like Sepang, Barcelona and Silverstone,” read the statement.

“No problems have ever been discovered, underlining the fundamental solidity of the product.

“The events of Spa can therefore be put down to external factors, linked with the prolonged use of the tyres on one of the most severe tracks of the championship.

“The external factors are demonstrated by a total of 63 cuts found in the tread of the Formula 1 tyres used over the course of the Spa weekend, following numerous incidents that took place during the support races before the Formula 1 grand prix.

“In the previous 15 events (10 races and five test sessions) an average of only 1.2 cuts per event were noted.

“All this indicates an anomalous amount of detritus on the track in Spa, with a consequent increased risk of encountering a foreign object.

“If even a small piece of debris – made of carbon or any other particularly sharp material – penetrates and cuts the various structural parts of a tyre (which is obviously subject to high-speed use, and more susceptible if used for a prolonged period) without penetrating the actual structure, this can cause a failure that is different to that found in the event of a normal puncture, which is characterised by a loss of tyre pressure.

“And the former was the type of event seen on Sebastian Vettel’s tyre at Spa.”

The findings have been presented to the FIA, while Pirelli has altered the tyre pressure levels and camber guidelines recommended to teams ahead of this weekend’s Italian Grand Prix.

The same medium and soft compounds used at Spa have been nominated for use at the Monza circuit.

Formula 1 Management has released a statement in support of Pirelli, claiming the F1 tyre supplier was not at fault for the failures at Spa.

“Pirelli has been a first class partner of Formula 1 during the five seasons in which it has been the Official Supplier of Tyres to the FIA Formula 1 World Championship and we continue to have full confidence in the safety, quality and suitability of its tyres,” the statement read.

“Within the constraints of safety considerations, which are always paramount, Formula 1 encourages Pirelli to provide tyre compounds with performance limitations because tyre degradation contributes to the challenge and entertainment of a Formula 1 race.

“When doing so, Pirelli provides strong guidance to competitors about any performance limitations of the tyres supplied.

“Competitors should heed Pirelli’s expert advice when setting their race strategy and tactics, and if they do not, it is at their own risk.

“We are entirely satisfied that Pirelli was not at fault for any tyre-related incidents during the 2015 Formula 1 Shell Belgian Grand Prix.

“Pirelli has offered to provide to each car a single set of tyres to last for an entire event. While we know that they would be very capable of it, a race with no pit stops would be less exciting.”