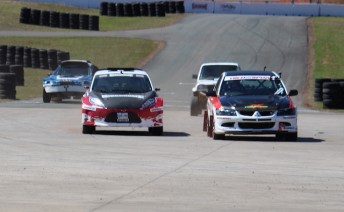 Rallycross has returned to Australia with the opening round of the Extreme Rallycross Championship underway at Lakeside Raceway.

The newly constructed rallycross circuit at the Brisbane venue will see 16 cars do battle in three classes over the inaugural event of the seven round Extreme Rallycross Championship.

Qualifying heats are due to begin this afternoon which will set the grid ahead of Saturday’s three rounds of five lap heats.

Times from the heats will decide the grid for the 10 lap finals held on Saturday afternoon.

Rally ace Alister McRae heads the line up in the top level 4WD class with the Scotsman piloting the only Supercar Lite in the six car field.

Seven cars have been entered in the 2WD category with three entries in the Hyundai Excel class.

Erebus Motorsport V8 Supercar driver Will Davison is scheduled to complete laps in the Supercar Lite this afternoon.