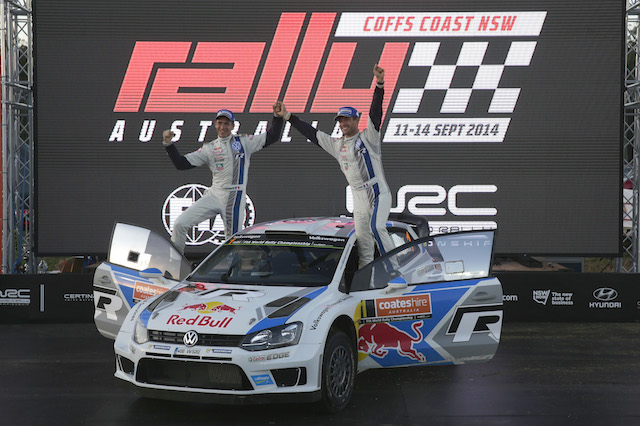 The fate of Coates Hire Rally Australia’s push to become the final round of the World Rally Championship will be known at the end of the month.

Rally Great Britain has flagged the possibility that it would move away from the last round in November to a month earlier from next year.

Confirmation of the 2016 calendar make-up is expected to take place at the FIA World Motor Sport Council meeting in Europe on September 30.

Rally Australia has mounted a strong case to take the Wales rally date in mid November which crucially steers it clear of clashing events.

The Coffs Harbour-based WRC round will clash with the V8 Supercars Sandown 500 next week for the third year in succession.

Rally Australia has inked a fresh contract with the WRC Promoter to retain its spot on the calendar for 2016 and 2017, despite reports suggesting it had only been granted a one-year extension.

“We have a signed contract with WRC for 2016 and 2017,” Rally Australia chairman Ben Rainsford told Speedcafe.com.

“It is not a one-year extension from this year, it’s a new contract as has been suggested.

“It gives us a bit of assurance of where we can invest and not worry about that aspect of the event.

“The dates (in November) we’ve asked for are clear of horse races, football finals and all the other major events that consume punters and media.”

Rainsford said the push for a calendar shift of the Coffs event remains in the hands of the FIA’s World Motor Sport Council.

“We are in the hands of the World Motor Sport Council so we can’t presume but we will keep making every endeavour to chase it,” he said.

If the move is rubber stamped, organisers are planning to throw a glittering party for the WRC teams in Sydney on the Monday after the event.

China is in the frame to take the September date if Rally Australia is granted its wish to become the final round which it occupied in 2004 and 2005 when it was based in Perth.