FG and VE get green light for Kumho V8 Series 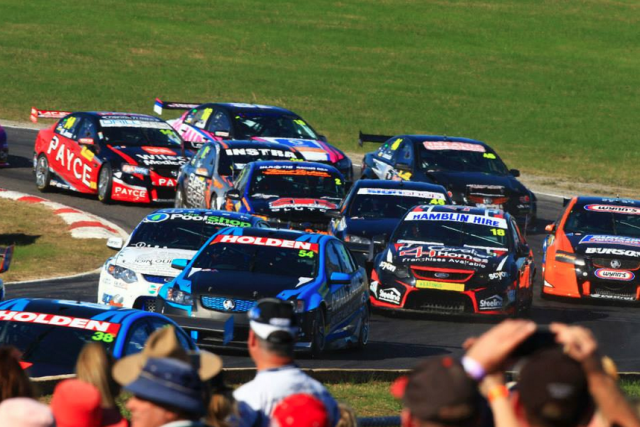 Occurring alongside V8 Supercars’ move to add Car of the Future chassis to the Dunlop Series grid, the long-discussed evolution of the Kumho Series has now been signed off by category management.

The pre-COTF FG was Ford’s frontline V8 Supercars entry between 2009 and 2012, while the VE and VEII, which will also be welcomed into the Kumho class, carried Holden’s hopes from 2007-2012.

Kumho Series category manager Liam Curkpatrick stresses that the EB-BF Falcons and VP-VZ Commodores all remain eligible, with the current front-runners expected to be competitive against the newer equipment.

“Our last evolution of the category came nearly three years ago with the introduction of the BF Falcon and sequential gearboxes, so it’s time for us to take the next step,” explained Curkpatrick.

“While we are allowing these later model cars into the class, it would be unwise to jump to the conclusion that the cars currently competing will be rendered uncompetitive next year.

“A well-prepared, well-driven and well-run VZ Commodore or BF Falcon will still be a very competitive car.”

All cars will meanwhile run to V8 Supercars’ standard 7,500rpm rev limit from 2016, abandoning the 7,000rpm maximum used in the Kumho Series since its inception in 2008.

With FGs and VEIIs also eligible to continue alongside the COTF cars in the Dunlop Series over the next two years, there will be an overlap between the second and third V8 Supercars tiers.

Competitors will not be able to run the same car in both classes, however, as V8 Supercars are re-issued with a specific Kumho Series logbook when they step back into the category.

The extent of the influx of FGs and VEs into the Kumho Series is currently unclear and will be heavily influenced by ongoing discussions within V8 Supercars over the roll-out of the COTF cars into the Dunlop Series.

So far only the Western Australian-based Kostecki brothers have confirmed that they will run COTF cars in the second-tier, purchasing two Holdens from Triple Eight Racing Engineering’s current fleet.

Many Dunlop teams are eagerly awaiting confirmation from V8 Supercars on the final specification of the COTF cars that will be allowed in, which will determine whether their current cars will remain competitive.

The sheer cost of the COTF cars, which are being offered for sale for upwards of $400,000 each, with engines, could force Dunlop Series teams to instead move with their current cars into the third-tier.

It is however thought unlikely that the COTF cars will migrate to the Dunlop Series without some level of technical specification tweak in order to prevent V8 Supercars Championship teams from using the class as a year-long test program.

Three teams – MW Motorsport, Eggleston Motorsport and Image Racing – currently run cars in both the Dunlop and Kumho Series – and will be among those heavily affected by the flow of chassis between the classes.

“What happens with all the Dunlop Series teams going into next year will clearly dictate the amount of cars available to flow into the Kumho Series,” MWM owner Matthew White told Speedcafe.com.

“V8 Supercars need to be very careful in how they introduce the new car into the Dunlop Series because if suddenly the only way to be competitive is to have a COTF, they are going to end up with very small field numbers.

“People are asking big money for the COTF cars and many are just not going to be able to afford to upgrade and stay in the series if that is the case.

“For the Kumho Series, I don’t think there’ll be much difference between the front-running BFs and the new FGs and VEs in terms of performance.

“But there’s currently a big spread of equipment in the Kumho Series and hopefully there’ll be an opportunity for more competitors to upgrade by opening it up to the newer models.”