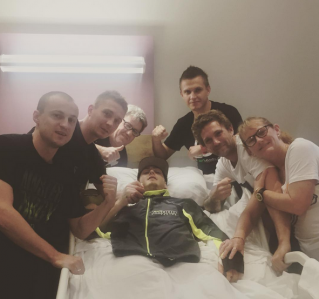 Darcy Ward surrounded by his mechanics and family. pic: Instagram

The November 7 meeting will see gate takings go to the foundation set-up for Ward, who suffered a crippling back injury following a crash in Poland which required a 2.5 hour operation.

The meeting will take place the Saturday night after the FIM Under 21 Teams meeting in Mildura.

The 23-year-old Ward has since been flown to a private hospital in the UK which specialises in spinal cord injuries.

“We are endeavouring to assemble a star-studded cast of riders which will make this a meeting not to be missed as we want as many people as we can to cram into the stadium and raise as much as possible for Darcy,” Parker said.

“It is too early to be able to name any of the Solo riders which we hope will include a number of overseas stars as well as the best of the Australian riders.

“I must thank Leigh Adams, Chris Holder and Mark Lemon for their help in arranging things so far, but I can already announce the top seven riders from last season’s Australian Sidecar Championship, plus former Australian Champion Mark Mitchell, will make up the eight rider Sidecar line-up.

Details remain guarded as to the extent of Ward’s injuries.

A Foundation to support Ward’s treatment and recovery has been established.