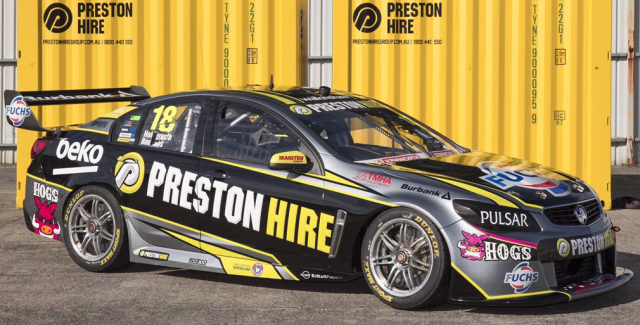 Walkinshaw Racing has unveiled a black and yellow Preston Hire livery for Lee Holdsworth and Sebastien Bourdais ahead of the team’s test at Winton tomorrow.

Preston Hire will continue as the car’s major sponsor at Sandown, having appeared on the doors of the previously blue and silver entry last time out at Sydney Motorsport Park.

The #18 Holden will run alongside its Holden Racing Team and Supercheap Auto Racing sister entries at Winton tomorrow.

“I’m always excited heading into the endurance season but even more so after finding a significant gain in speed at Sydney Motorsport Park; and I feel confident we can carry that through the enduros,” said Holdsworth.

“It’s also a massive bonus to team up with Sebastien. He’s an incredible driver and I just can’t wait to get it underway.

“The main aim for the test day is to give Sebastien as many laps as possible so he is comfortable before Sandown.

“The other goal is to confirm we’ve gained speed since we were last at Winton.”

Bourdais arrives in Australia following a frustrating finish to the IndyCar season at the weekend, which saw the Frenchman finish 20th after a penalty for spinning Graham Rahal.

Tomorrow’s test will also see Russell Ingall cut his first laps in the #22 HRT entry as he prepares to replace the injured James Courtney.