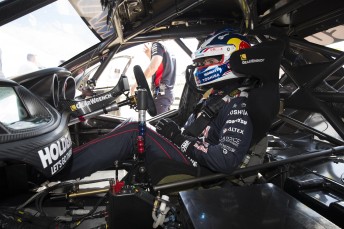 Jamie Whincup has described Red Bull Racing’s test day as ‘super crucial’ for his championship campaign as he aims to bed in a new chassis ahead of the Pirtek Enduro Cup.

The reigning V8 Supercars champion will debut a new V8 Supercar for the first time in two years at the upcoming Sandown 500, which has increased the importance of the team’s scheduled test day at Queensland Raceway.

Amid the current private testing restrictions, Whincup feels Red Bull has to maximise the opportunity to ensure the team continues to improve its car speed for the remaining championship events.

The six-time champion, who broke a 15 race winless streak last time out at Sydney Motorsport Park, is hopeful a new car will play a key role in closing the gap to his rivals.

The last time he debuted a new car Whincup and co-driver Paul Dumbrell claimed an impressive victory at the 2013 Sandown 500.

“It is super crucial,” Whincup told Speedcafe.com of today’s test.

“We only practically get one day a year so we have got to maximise it.

“If we get hit with an engine failure or a tail shaft problem or the weather is dodgy then that is going to hurt us pretty hard, so fingers crossed we have good day.

“We need to improve our car speed and we have been doing that, but we need to continue.

“Without a good day, there is a very slim chance we will improve the car.

“We had a great run the last time we debuted a new car but it doesn’t guarantee this time round but hopefully it’s a bit nicer.

“A new car should be a better, no doubt, but every car is different so you have got to try and find the balance.”

While finding the balance in his new car remains a key test objective, Whincup says the team will test a selection of new parts in a bid to close the gap to the championship pace-setters Prodrive.

“We have improved a lot over the last two months but we have still got a long way to go.

“Everyone has got their last test day and I’m sure they (Prodrive) will find something and hopefully we can find a few things as well.”