Jamie Whincup’s new chassis has made a troubled debut at the team’s Queensland Raceway test day, completing minimal laps due to a persistent vibration.

The problem limited running for Whincup and co-driver Paul Dumbrell to 34 laps, well short of the expected mileage at the squad’s only private test of the season.

Red Bull changed several components in a bid to identify the issue without success, leaving the team to pour more resources into resolving the problem back at its workshop.

Whincup’s engineer Mark Dutton says the team is determined to fix the vibration and run the new chassis at the Sandown 500 from September 11-13.

“It restricted us massively, I have never done a test day where we have done so few laps,” Dutton told Speedcafe.com of the issue.

“We were probably 400km short of what we would normally do at a test day.

“It is not ideal but I’m confident the boys can do a good job at the factory and sort it out.

“It is only on track that you can definitely be sure but there will be no stone left unturned (to fix it).

“The car would have been stripped down anyway, it will just have even more attention put on every single nut, bolt, washer and component now.

“It is a big job and there is a lot of work ahead for everyone, but that is what we do.”

Dutton explained that the vibration did not hurt lap times but, if left unresolved, would cast a doubt over reliability.

“It didn’t appear to be slowing us down so the few laps we did were always pretty quick,” he said.

“At Sandown you could practice, qualify and even race with it but if something is not right at some stage it will cause an issue.

“Maybe it’s not going to cause an issue until after 2,000km of running, which would mean Sandown would be unaffected, but you don’t want to assume those things if you don’t have to.”

While Whincup’s test was heavily disrupted, Craig Lowndes and co-driver Steve Richards enjoyed a trouble free day as they clocked up valuable mileage.

“It went smoothly (for Craig and Steve) so much so when that car was out on track the mechanics on that car would come over when they could to help car #1,” added Dutton.

“I was really proud of the boys to see everyone working together.”

Red Bull shared the track with Tekno Autosports as its drivers Shane van Gisbergen and Jonathon Webb both enjoyed spells behind the wheel.

The teams drove the layout in reverse during the middle of the day to mimic pit stop procedures for Sandown, where the pit lane is located on the right hand side of the circuit. 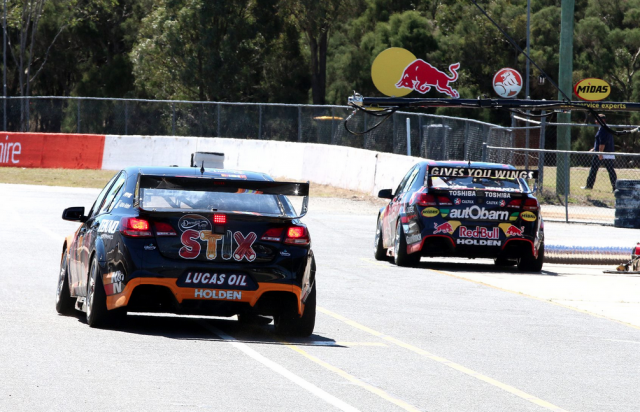 The teams spent a portion of the day driving QR in the reverse direction in order to practice pit stops for Sandown. pic: Matthew Paul Photography