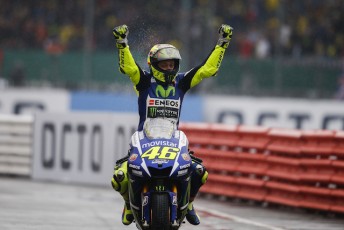 Valentino Rossi celebrates victory in British Grand Prix which saw him regain the lead of the championship.

The Australian five-time 500cc motorcycle world champion has admired Rossi’s measured approach this season, which has seen the iconic Italian finish on the podium in every race of the 2015 campaign.

Rossi’s third victory of the year at Silverstone’s British Grand Prix on Sunday saw him open up a slender 12 point lead over Jorge Lorenzo in the title race.

Like Rossi, Doohan enjoyed success in the latter stages of his career with his last world title sealed at Phillip Island in 1998 arriving aged 33, three years younger than the current MotoGP championship leader.

Rossi is eight years senior than his Yamaha title rival, the 28-year-old Lorenzo.

“Physically he’s in great shape and a more calculated approach to racing has put Valentino in the position he’s in this year. There’s no reason why he can’t end up on top this season.”

The title race looks set to be settled between Rossi and Lorenzo after Marquez ruled himself out of the running following his crash from second position at Silverstone.

The reigning world champion is 77 points adrift of Rossi with six races remaining.

“We’ve lost our hope of the championship, but we will try to win many, many races – as many as possible from now to the end of the season,” said Marquez.

MotoGP heads to Misano for Round 13 of the championship from September 11-13.