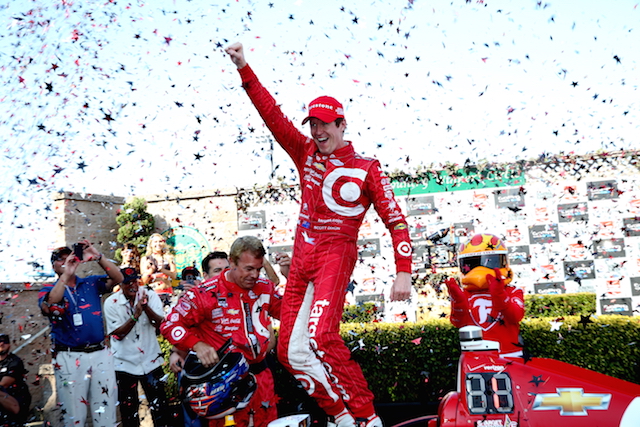 Star New Zealander Scott Dixon has claimed his fourth IndyCar Series title as the Ganassi team outgunned Team Penske in a battle of the heavyweights at Sonoma.

Chip Ganassi Racing stalwart Dixon stormed to his 38th career win and successfully defended his race title from Sonoma as the series went down to the last corner in a cliffhanger.

Andretti Autosport driver Ryan Hunter-Reay finished second while Charlie Kimball (Ganassi) was third as the pair were just bit players in a thrilling finish to the series.

With Dixon and Montoya finishing level on 556 points, the Kiwi won the title by virtue of claiming more wins, three versus two, as the series fight proved gripping until the very end. His impeccable series record has seen him finish no further back in standings than fourth over the last 10 years.

Dixon, already entrenched as one of the all-time greats of IndyCar racing, drove an intelligent race, immediately going into fuel saving mode as soon as he moved into a prominent position.

“This is just fantastic for Target and obviously for Chevy as well,” a stunned Dixon remarked as Ganassi celebrated its 100th IndyCar win.

“I don’t know what to say. Our thoughts and prayers to Justin Wilson’s family and Stefan (this brother) is here as well.

“This season we had some good races; Long Beach (win) was a first for me which as a big milestone and Indy was a massive disappointment just because I thought we had a car to beat until we had overheating issues.

“We were such a longshot to get this through and I guess we won it on countback too for most wins.

“I was counting the cars under caution to see where JPM (Montoya) was.

“You constantly kind of know where they are and you are trying to calculate points as well but the team were saying nothing and I knew it was going to be extremely close.”

Series hopes for Penske drivers Montoya and Will Power were dashed through friendly fire before half-race distance.

Dixon though made his move with a brilliant pit stop during the first caution period when he picked up a couple of valuable positions.

A surprise caution was thrown for Luca Filippi who was touring slowly around the course on Lap 33.

It triggered a flurry of pit activity with front-runners Power, Josef Newgarden and Dixon leading a stream of cars to be serviced.

Dixon’s Ganassi crew managed a lightning stop with the Kiwi leaping two places on returning to the track where the leaders were buried mid-pack behind those which chose not to pit.

Shortly after Power was tagged in the right-rear tyre by Montoya, which saw the Australian slide off the circuit at Turn 5, bringing out another yellow before he was able to rejoin.

Officials viewed the incident and deemed that no further action should be taken.

Montoya, 14th at the time, was forced to pit to replace his damaged front wing while Power too went in for a fresh set of tyres.

The Lap 43 restart saw Montoya and Power mired down in 23rd and 24th respectively.

Dixon was the highest of the series contenders in eighth but he would soon move up to second, behind team-mate Kanaan, once the out-of-sequence leaders pitted.

The Kiwi then took command as he led Newgarden with Kimball third while Graham Rahal was fourth.

Newgarden had a small fuel fire during a stop just before Dixon pitted on Lap 63.

The third caution period was thrown with 20 laps remaining when James Jakes had a wild slide into the tyre barriers after having a mechanical issue.

Dixon was at the front of the field behind the Safety Car holding all the aces in the closing phase of the race but was kept in the dark as to the championship position with Montoya.

The 35-year-old fired off into the distance on the Lap 70 restart but the field was neutralised again when Carlos Munoz beached himself on a kerb.

Inside the last 10 laps Sebastien Bourdais ploughed into the back of Rahal forcing the latter into a spin with his series hopes already dashed by an ill-handling car.

Bourdais was served a drive-through penalty for the contact which moved Montoya up a position however in the end it was not enough.

The Colombian had led the series from the opening round in Florida during a campaign that also netted the Indy 500 title in May.