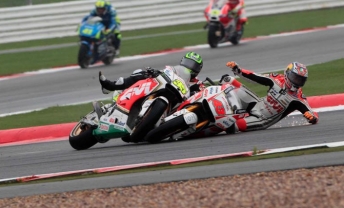 Jack Miller has apologised to LCR Honda team-mate Cal Crutchlow after causing a collision which wrecked the their promising British Grand Prix hopes at Silverstone.

The Australian MotoGP rookie produced an incredible start in tricky wet conditions to emerge in fifth position from 16th on the grid in the opening two laps.

Miller’s rise saw him challenge Crutchlow for third position on the second lap when he misjudged an overtaking move, resulting in heavy contact with his team-mate at Vale corner.

Crutchlow remounted his bike bust soon retired from his home race, while Miller became an instant retirement following the clash.

The Townsville rider has admitted fault in the crash issuing a apology to Crutchlow, while Race Direction handed the Queenslander a penalty point for “irresponsible riding”.

“I want to say a big sorry to Cal for taking him out, but we were both pushing hard.

“I didn’t actually mean to overtake him, I was just trying to hold Espargaro off on the brakes and accidently went too deep and touched him.

“It was an accident, but all in all it was a good weekend as we found some settings with the bike we became more comfortable with and I’m looking forward to Misano.”

Miller will return to action when the championship heads to Misano from September 11-13.

“Misano is a good track for me, I like it a lot. It will be a new surface this year so I look forward to seeing what the grip level is like as last year was quite low, but it should be interesting,” Miller added.