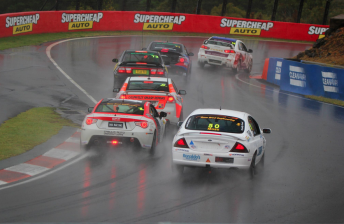 Organisers of next year’s Hi-Tec Oils Bathurst 6 Hour have targeted a 40 car grid for the inaugural race following strong initial interest from competitors.

Run by former Bathurst 12 Hour promoter James O’Brien, the race will be made up of Group 3E production cars spread over eight classes, plus an Invitational category that will allow for the likes of V8 Utes and Saloon Cars.

Building on the strongly supported NSW Production Touring Car fields that have been drawn to the Bathurst Motor Festival in recent years, O’Brien says that 70 expressions of interest have been received from potential competitors.

Entries officially open next week ahead of the March 27 race, which will become the showpiece of the annual Easter BMF.

“We are very pleased with the early interest in the Bathurst 6 Hour which has proven demand exists for this race,” O’Brien said.

“We are confident these EOIs will translate into a grid of at least 40 cars, which is our target for the inaugural race.

“A field of that size around Mount Panorama should ensure a spectacle for spectators, our online audience and TV viewers.

“Competitors committing early will be rewarded with a discounted entry fee, along with securing a grid spot in the event we are inundated with entry forms.”

Competitors will receive three 50 minute practice sessions and a 40 minute qualifying in the lead-up to the race, which is scheduled to kick-off at midday on the Sunday.

Entries can be made up of two or three drivers, with a three and a half hour maximum driving time stipulated for any competitor.