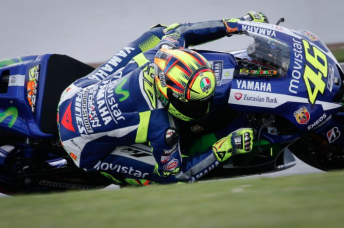 Valentino Rossi produced a wet weather masterclass to claim an impressive victory in the British Grand Prix at Silverstone.

The Yamaha rider once again showcased his skills in tricky wet conditions as he dominated the race to regain the lead in the MotoGP world championship standings.

Rossi assumed the lead on the second lap once racing began following an aborted start due to the inclement weather.

Marquez’s demise allowed Rossi to complete a comfortable win ahead of Pramac Ducati’s Danilo Petrucci, who produced one of the surprises of the season to come home in second for his maiden MotoGP podium.

Ducati’s Andrea Dovizioso claimed the final podium place after coming up short in his battle with Petrucci.

Jorge Lorenzo had led the championship heading into the race but he struggled for pace in the wet conditions, which saw the former double world champion finish in fourth.

As a result, the Yamaha rider has fallen 12 points adrift of Rossi in the championship standings.

Honda’s Dani Pedrosa produced a solid ride to come home in fifth ahead of top Brit Scott Redding, who announced a move to Pramac Ducati for 2016 prior to the race start.

Redding finished ahead of fellow Brit Bradley Smith, Andrea Iannone, Aleix Espargaro and Alvaro Bautista, who rounded out the top 10.

The Townsville rider stormed from 16th on the grid to fifth in the opening laps but his race soon came to an abrupt end on lap 2.

Miller tried a move on third placed Crutchlow from a long way back which resulted in the pair making contact at Vale corner.

Crutchlow remounted but soon retired from the race, while Miller’s day ended immediately.

The incident was set to be investigated by Race Direction at the conclusion of the British Grand Prix.

The MotoGP world championship heads to Misano for Round 13 from September 11-13.