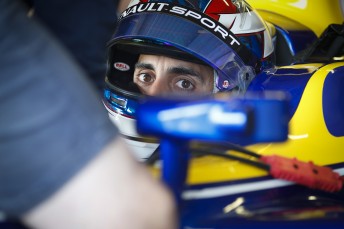 The Renault e.dams FIA Formula E squad has confirmed it will retain the services of Sebastien Buemi and Nicolas Prost for the second season of the all electric championship.

The duo combined to deliver four wins and three podium finishes to clinch the Teams’ Championship for the French squad in the inaugural Formula E campaign.

The operation will receive further backing from Renault this season while introducing its new Renault Z.E.15 powertrain permitted for the 2015-2016 championship.

Buemi returns to the e.dams outfit after falling one point shy of eventual champion Nelson Piquet Jr in a season that saw the Swiss driver record three race wins.

The 26-year-old will once again dovetail his Formula E campaign around his FIA World Endurance Championship commitments with Toyota’s LMP1 team.

“The team is a little bigger than last year with Renault being on board but having a big manufacturer like that only strengthens the team,” said Buemi.

“After our promising performance in testing things are looking good, but it’s too early to say what will happen during the season. Let’s see.”

Prost, the son of four-time Formula 1 world champion Alain Prost, scored one race win last season and is already showing glimpses of that form by topping the times at the recent pre-season test at Donington Park.

The 34-year-old, who finished sixth in the inaugural championship, is hoping the continuity from the first campaign will see the team continue to perform in season two.

“It’s important to stay in the same team for the sake of continuity,” said Prost.

“Everyone knows each other well and it’s much easier to work with the same guys and in the same environment.

“It’ll be exciting to see what we can achieve this year, especially with the new powertrain from Renault and a promising first run at Donington.”

The FIA Formula E season begins on the streets of Beijing from October 17.